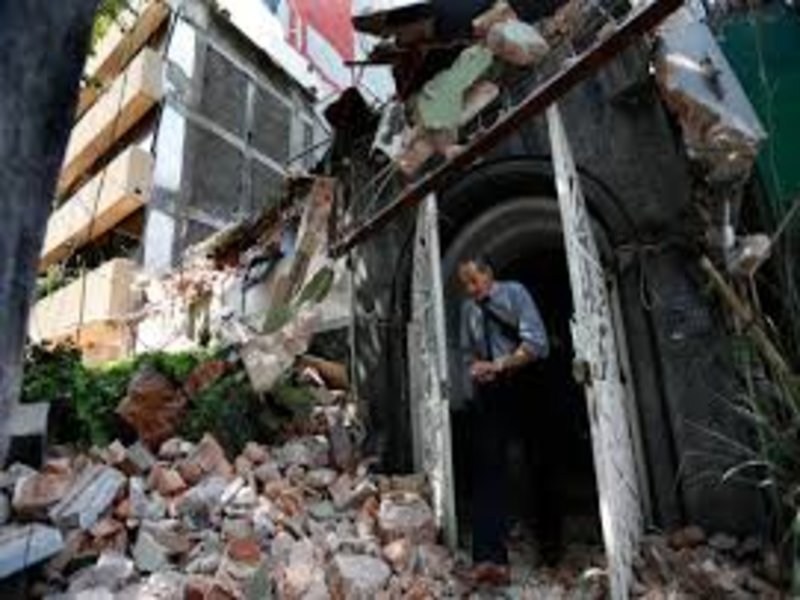 Mexico City, Mexico – Fabiola Luna Rios was in her house in the southern part of this city when Tuesday’s earthquake struck.

“This was a horrible experience,” the 47-year-old told Al Jazeera as she sat with her husband, Jesus Alberto, on Obregon Avenue on Tuesday night.

“I really felt panic,” she said. “I went out to the street, but when I saw my house, I saw it moving left to right.”
Alberto, who was in Mexico state at the time, added that he thought “the ground was opening up”.

“I felt houses were falling and for two seconds, I thought we would die,” he told Al Jazeera.

The 7.1 magnitude earthquake, which struck shortly after 1:00pm local time 18:00 GMT, caused dozens of buildings to collapse and sent residents fleeing to the streets.

By midnight, at least 248 people had been killed across central Mexico, including 21 children who died after their school building collapsed.

Officials said the the death toll was expected to rise.

“At the moment 248 deaths are reported,” Luis Felipe Puente, the director of the government’s civil protection service, said in a tweet just after midnight on Wednesday.

At least 117 deaths were reported in Mexico City and its surrounding areas. In the state of Morelos, directly south of the capital, 72 people were killed.

Another 43 people were reported dead in the state of Puebla, about 122km from Mexico City and the location of the earthquake’s epicentre.

In Mexico state, he said 12 people were killed, while three died in the state of Guerrero. One person was killed in Oaxaca state.

Scenes of chaos and destruction were seen across Mexico City, as rescue workers and others raced to find and help survivors still trapped under collapsed buildings.

It was the second earthquake to strike Mexico in less than two weeks. The first tremor – a powerful 8.1-magnitude earthquake – hit southern Mexico on September 7, killing at least 98 people and destroying and damaging thousands of homes.

‘This was way stronger’
For those who were alive in 1985, Tuesday’s quake brought back familiar feelings experienced during the devastating earthquake that killed some 10,000 people exactly 32 years ago.

“This is not the first time I’ve felt something like this,” Luis Alvarado, 39, told Al Jazeera from the neighbourhood of La Condesa in Mexico City.

“I witnessed the one in 1985 and the feeling wasn’t very different,” he said.
Maria Irene Pies, who lives in the La Roma neighbourhood, agreed, but said she felt Tuesday’s quake was much stronger.

“I was here during the 1985 earthquake, but I felt this was way stronger,” the 73-year-old told Al Jazeera.

“I was in my house when the earthquake started and it was really strong,” she said.

Pies, who lives near a medical laboratory, has been told to stay away due to fears that chemicals may have spilled during the tremor.

Like many others in Mexico City, she has moved to the streets over worries of aftershocks.

Mexican President Enrique Pena Nieto, who said on Twitter that had been flying to Oaxaca went the tremor struck, returned to Mexico City on Tuesday afternoon where he called an emergency meeting.

In a tweet, he warned Mexicans to “review the damage, disconnect the lights and turn off gas” before returning to their homes.

He also visted the site of the collapsed school where at least 22 pupils were killed. Thirty-eight remained missing.
Officials gave out the numbers of shelters and hostels for those needing a place to stay.

‘We are united’
Fernando Irando, who also lives in Mexico City, said that while he is used to earthquakes, “this [one] went above and beyond” any he has felt before.

“I think the city resisted it and I think there will be aftershocks and I hope we will be able to resist it,” the 61-year-old told Al Jazeera.

Just after nightfall, rescue workers and residents continued to search for those who were trapped under rubble.

In the neighbourhood of La Roma, residents desperately called for help, asking friends and family to bring medicine, food, water, lamps and batteries to help rescue workers and those still trapped under collapsed buildings.

“There are people trapped among the rubble and we are trying to give all the support,” Ana Marina Orenday Porras told Al Jazeera.

“Colonia Roma [Street] is devastated,” she said, referring to one of the main avenues of Mexico City.

“As we walked around, we realised that many buildings have fallen and many are about to fall, and we are trying to give all the support we can, as citizens, because authorities can’t cope with the size of the disaster.”

Back on Obregon Avenue, Rios and Alberto, said that unlike in 1985, they felt people were better equipped to react to a tremor this size.

Alberto agreed, adding “after all, we are all Mexicans and we are always united”.