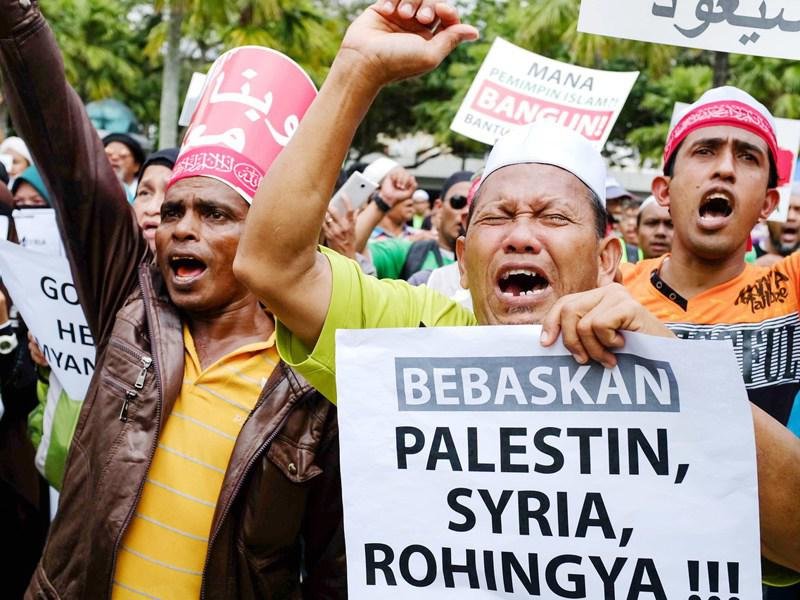 The Arab Union and Arab Parliament on Wednesday condemned the latest violence and violations in Rakhine state.

The Arab Parliament, in a written statement, called for international action to stop the “massacre” of Rohingya Muslims, by making an effort to better their life standards and unraveling their difficulties.

The parliament called upon the UN, Association of Southeast Asian Nations (ASEAN), and the Organization of Islamic Cooperation (OIC) to ‘take immediate action’.

They also urged the perpetrators to be brought to the International Criminal Court for ‘committing crimes against humanity’ and ‘systematically cleansing religion and ethic’.

Separately, the Arab Union released a statement, urging Myanmar authorities to take responsibility by investigating violations and having the perpetrators brought to justice for their actions against Rohingya Muslims.

Walid Abdul Karim El Khereiji, Saudi Ambassador to Ankara, said his country is making an effort to stop the violation of rights against Rohingya Muslims in Myanmar.

He said Saudi Arabia has taken steps to move the violations to international platforms and the UN made an urgent condemnation decision as a result of contacts with the General Secretary of the UN.

He stressed that Saudi Arabia had actively urged the UN security council countries to have Rohingya on the agenda.

“Saudi Arabia Kingdom, as leader of the Islamic world, will continue its efforts and contacts for finding a solution to the crisis on international level,” he said.

According to the UN, 123,600 Rohingya have crossed into Bangladesh as tens of thousands more were internally displaced by the latest violence.

Rakhine state has seen simmering tension between its Buddhist and Muslim populations since communal violence broke out in 2012.

The report found evidence of human rights violations by security forces that indicated crimes against humanity.
Rohingya representatives said around 400 people were killed in the crackdown.

In recent weeks, the government has boosted its military numbers in Maungdaw, and the Arakan Rohingya Salvation Army (ARSA) claimed responsibility for attacks in which the government said dozens were killed.

The ARSA said the attacks were in response to raids, killings, and looting by soldiers.