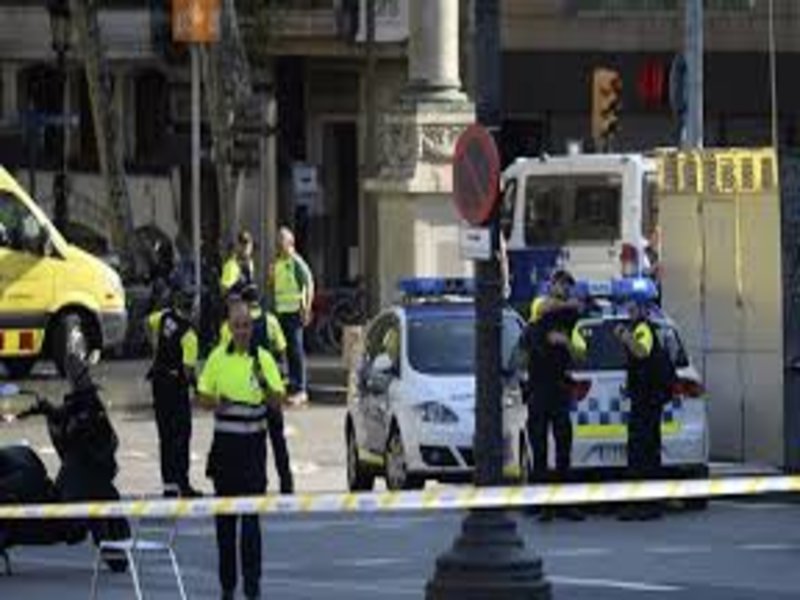 A manhunt was underway for the driver of a van that mowed through crowds of tourists on Barcelona’s most famous avenue on Thursday, killing at least 13 people in an attack that was claimed by Daesh.

Authorities said the death toll could rise, with more than 100 people injured, some seriously.

Police said they arrested two men, a Moroccan and a man from Spain’s north African enclave of Melilla, though neither was the driver. Witnesses said the driver fled on foot.

It was still not clear how many attackers had been involved.

Hours beforehand, one person was killed in an explosion in a house in a town southwest of Barcelona, in an incident linked to the attack, police added. Residents of the house were preparing explosives, a police source said.

As the manhunt continued into the night, police said several attackers were killed in a shootout during an operation against what they called a possible “terror attack” in Cambrils, another town south of Barcelona.

Earlier in Barcelona, witnesses said the white van zigzagged at high speed down Las Ramblas, a busy avenue thronged with tourists, ramming pedestrians and cyclists, sending some hurtling through the air and leaving bodies strewn in its wake.

Daesh’s Amaq news agency said: “The perpetrators of the Barcelona attack are soldiers of the Daesh and carried out the operation in response to calls for targeting coalition states” – a reference to a US-led coalition against the Sunni militant group.

Spain has several hundred soldiers in Iraq providing training to local forces in the fight against Daesh, but they are not involved in ground operations.

Daesh’s claim could not immediately be verified.

If the involvement of Islamist militants is confirmed, it would be the latest in a string of attacks in the past 13 months in which they have used vehicles to bring carnage to the streets of European cities.

That modus operandi – crude, deadly and very hard to prevent – has killed well over 100 people in Nice, Berlin, London and Stockholm.

British tourist Keith Welling, who arrived in Barcelona on Wednesday with his wife and 9-year-old daughter, said they saw the van drive past them down the avenue and took refuge in a restaurant when panic broke out and the crowd started running.

“People were shouting and we heard a bang and someone cried that it was a gunshot … Me and my family ran into the restaurant along with around 40 other people.

“At first people were going crazy in there, lots of people crying, including a little girl around three years old.”

It was the deadliest attack in Spain since March 2004, when militants placed bombs on commuter trains in Madrid, killing 191 people and wounding more than 1,800.