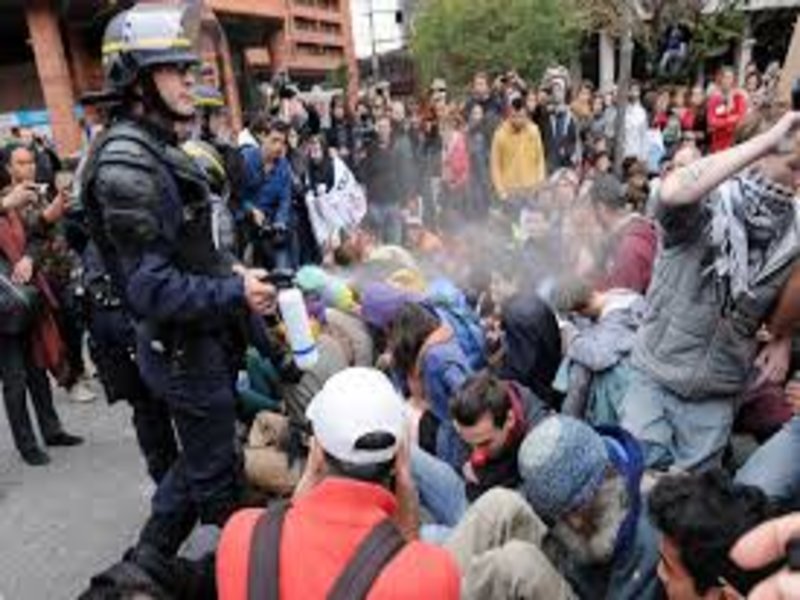 Wednesday’s report – titled Like Living in Hell – accuses police and riot squads of regularly using pepper spray on asylum seekers, including children, who do not pose a threat, such as while they are sleeping.

“It is reprehensible for police to use pepper spray on children and adults who are asleep or peacefully going about their day,” said Benedicte Jeannerod, HRW’s France director.

“When police destroy or take migrants’ blankets, shoes, or food, they demean their profession as well as harm people whose rights they’ve sworn to uphold.”

French authorities have denied the accusations in the report, which relied on interviews with 61 people.

Fabien Sudry, prefect for the Pas-de-Calais region, said he “categorically denied the false and defamatory allegations” in the report, which he claimed, “have no evidential basis”.

“Police, of course, operate in Calais respecting the rules of law, with the sole objective of ensuring public order and security,” Sudry added.

‘They kick us’
For more than a decade France’s northern coast has been a magnet for refugees and migrants trying to reach Britain.
In October last year, authorities dismantled the “Jungle”, Calais’ decrepit makeshift camp where thousands lived in the hope of climbing aboard trucks or trains to get across the English Channel.

But HRW said hundreds of asylum seekers and migrants, mostly Eritreans, Ethiopians and Afghans, are still living on the streets and in wooded areas in and around the port city.

“Every day, the police chase us. They use spray. They kick us. This is our life every day,” said Waysira L, a 16-year-old boy from the Oromo community, an ethnic group in East Africa.

Earlier this month, French police evicted some 2,000 refugees and migrants who had been sleeping in the streets of Paris.

The newly-elected French President Emmanuel Macron has said he intends to overhaul the country’s asylum system and install “a more human, and fairer” process.