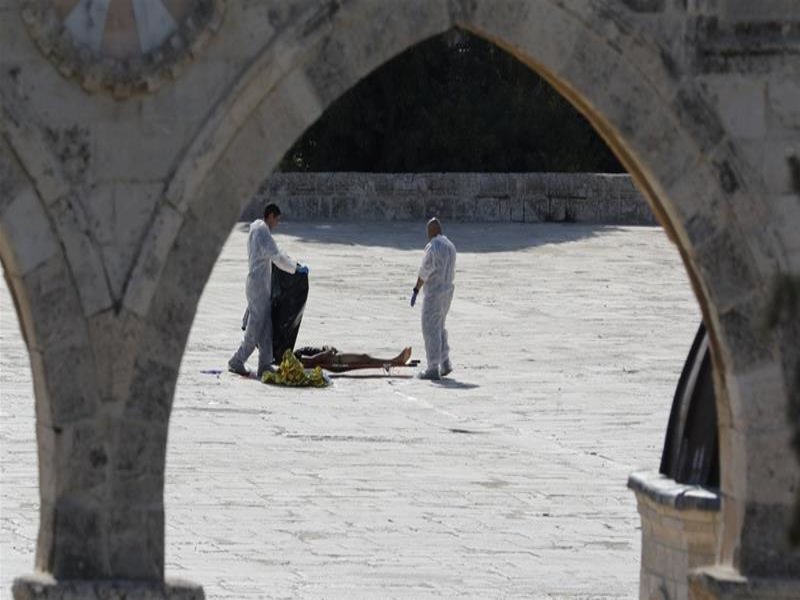 Three Palestinians opened fire near Al Aqsa compound in Jerusalem’s Old City, wounding three Israelis, before they were killed in a gunfight.

Israeli police said the three gunmen reached one of the gates near the Al Aqsa compound, opened fire and fled towards Al Aqsa mosque where they were shot dead by Israeli police officers on Friday.

Al Jazeera’s Harry Fawcett, reporting from Jerusalem, said the Palestinians reportedly exchanged fire with the police officers near the Dung Gate of the Old City.

“Management of Al Aqsa mosque said the bodies of two Palestinians were inside the courtyard of the mosque compound,” Fawcett said.

Two of the wounded police officers were in serious condition, according to medical services.

Israeli police ordered the closure of the compound, saying there would be no prayers at the site on Friday.

The ancient, marble-and-stone compound houses the Al Aqsa mosque, Islam’s third-holiest site, and the 7th century Dome of the Rock. Thousands pray there every Friday.

The western wall of the compound, also known as the Wailing Wall, is considered the holiest site in Judaism.

In a separate incident on Friday, Israeli forces shot dead an 18-year-old Palestinian during a raid in Dheisheh refugee camp south of Bethlehem in the occupied West Bank.

Since September 2015, Israeli forces have killed more than 254 Palestinians, most of them said by Israel to be attackers.

In that same period, Palestinian attackers have killed 43 Israelis, two visiting Americans and a British tourist.