Syria’s displaced: A Ramadan full of grief and poverty 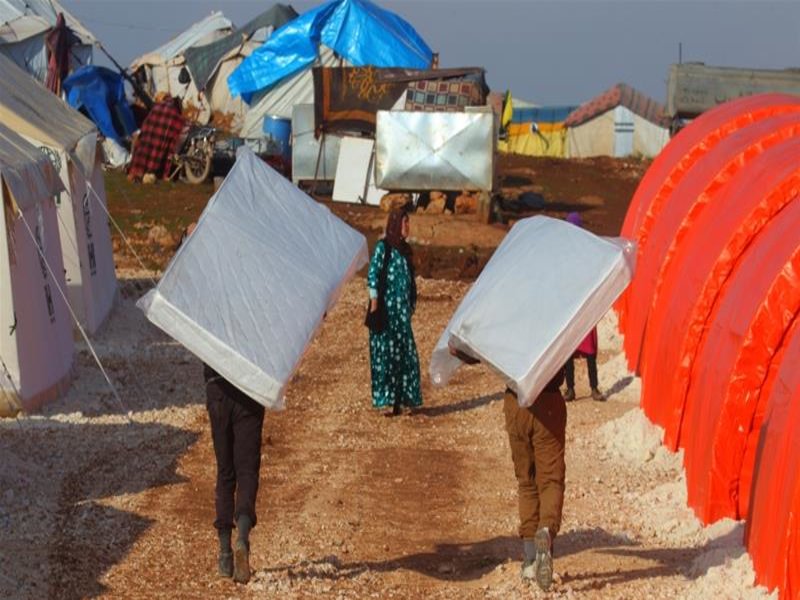 Hundreds of Syrian families continue to languish in refugee camps, facing poverty and difficult conditions after being displaced from their homes and towns.

Since 2014, both the Syrian government and armed opposition groups have reached a series of agreements in a number of besieged areas, mainly aimed at allowing armed opposition fighters to leave government-besieged cities and towns to opposition-held areas in northern Syria, near the borders with Turkey.

Under such evacuation deals, thousands of rebels, along with their families, have been forced to surrender as a result of intense government shelling and sieges across a number of opposition-held towns around the capital Damascus, as well as in Aleppo and Homs.

While the government views such agreements as an opportunity for civilians to flee to safer areas, opposition groups, activists, and some civilians view the deals as a form of forced displacement.

In December 2016, the Syrian government recaptured Aleppo from rebels and the subsequent evacuation deal gave the Syrian army and its allies full control of the city after years of fighting. The United Nations said the forced displacement of eastern Aleppo amounted to a “war crime”.

Most have been transferred to the northern suburbs of Aleppo, and Idlib, which now hosts over 900,000 displaced Syrians, placing a significant strain on local communities and resources.

Al Jazeera spoke to two families who were relocated from Aleppo and the Damascus suburbs to camps in Idlib’s suburbs.

From Aleppo to Idlib
Ali Haj Khaled is a 41-year-old father of three children. His family used to live in al-Myasaar neighbourhood in Aleppo, where he was born. His family now lives in the town of Salqin in the northern Idlib suburbs.

For my family and I, and for many other people who have been and are still being displaced from their homes all around Syria, I believe being back at home is way more comfortable for us than living in camps.

Despite the siege we lived under and the hunger we were facing, we were happier then than we are now. We are living in tents now. Is this seen as a better life in the eyes of those who wanted us to leave? Do they think we live in better conditions now?

They should have left us back at home to die under the rubble or from starvation; at least we would have died with dignity in our own homes.

They gave us no choice but to leave and here we are, barely finding money to buy basic necessities which are already so expensive.

Jamela is a 35-year-old mother of two young girls who now lives with her family in a camp outside Idlib. Her family used to live in Moadamiyah just outside of Damascus.

Last Ramadan was like every Ramadan we’ve had since 2012 – bombs and clashes day and night, but life went on for us. We continued to go out to buy our resources; men were still going to work, just like many other families living in rebel-held areas.

My husband, Basem, used to work as a teacher in one of the schools in the neighbourhood. Basem’s job was the only source of income helping us survive. We managed to keep our strength despite the price hikes caused by the siege. We survived until the very last moment.

We did not want to go to a government-controlled area, our home is here. We had nowhere else to go and we could not afford to rent a house in Damascus.

Our lives and memories are all buried under the rubble of Moadamiyah’s streets and destroyed buildings, we lived there knowing we had to face death every step of the way during this war.

But now we are struggling to buy resources even more, to pay rent for a small room, and to find clean water. My husband and I run around day and night to maintain a decent home, a place for our two children to sleep every night.

We do not want to ask anyone for help; it has become very frustrating to ask people for help.

No one has helped us with aid or anything, back home or here at the camps. We even registered our names at the local council here, but we have received nothing. We have been here for over five months.

The things I miss the most about my home during Ramadan was when I used to prepare the iftar meal every day, and how we were together with the rest of our family, friends and neighbours. Despite being bombed and shelled, even during iftar time, we still felt some sort of joy. We’re nostalgic every day this Ramadan.

We miss our home and the smell of our food. Everything is different now, we do not belong here. We are still in Syria, I know, but I do not feel at home. There is no place like home, even if I were to live in a palace I will not be happy, because I am living away from my roots.

I miss the sound of the call to prayer from the nearby mosque, sounds of “mosaharate” (the name given to a person who walks and beats a drum in residential areas) waking people up for “suhur”.

To be honest, I sometimes miss the sound of warplanes and the bombs, because it reminds me of home.

Everything has changed in our lives. We do not know when we are going back home. Maybe one day we will be able to go back home. I hope so, I’m praying for that.