Longest and shortest fasting times around the world #Ramadan2017

We used prayer timings in major cities of these countries to calculate the intervals between Fajr (preceding sunrise) and Maghrib (marking sunset) on the expected first day of Ramadan, May 27.

In countries where sunset and sunrise are too close (less than 3 hours apart) or are indistinguishable, fatwas have been issued to allow Muslims to follow the timings of the closest city that has have distinguishable day and night timings.

Below are graphs depicting the countries that have the longest and shortest intervals from Fajr to Maghrib.

Some other countries(not featured on the graphs) and their fasting times are:

Europe
The longest fast in Europe based on our findings is in Iceland with just three hours of night time, while Spain, Turkey and other countries have comparatively lower intervals, ranging around 16 hours of fasting. 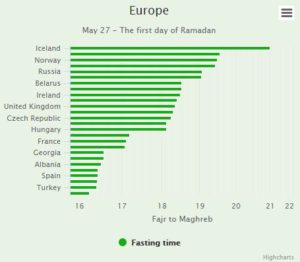 Greenland being the northern-most country in this part of the world has the longest interval between Fajr and Maghreb at 21 hours and 2 minutes. Argentina has the one of the shortest times at 11 hours and 32 minutes. 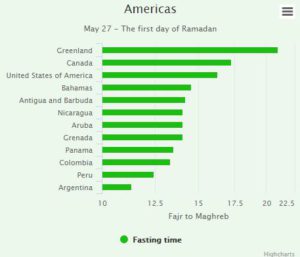 The shortest fast out of all our neighbouring Arab countries will be in Sana’a, Yemen. 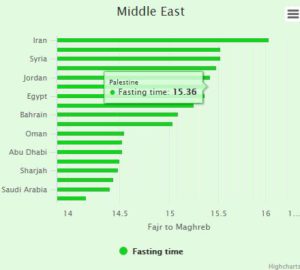 Asia
We split this list into two and the shortest fast time is in Cocos, Keeling Islands 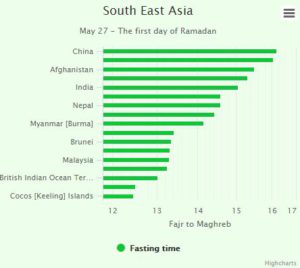 Kazakhstan has the longest fast hours in Asia as per our calculations with 18 hours and 12 minutes between Fajr and Maghreb. 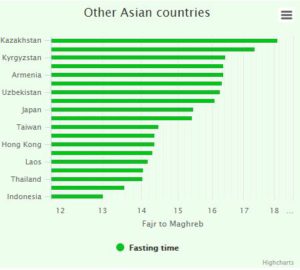 Australia
These two timings represent an accurate average of the timings across the island continent. 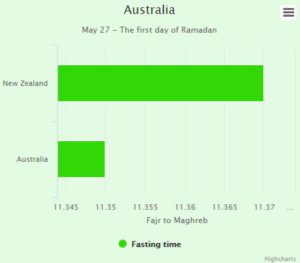 Africa
Here are four countries that give a good average of how Ramadan fasts look in Africa. 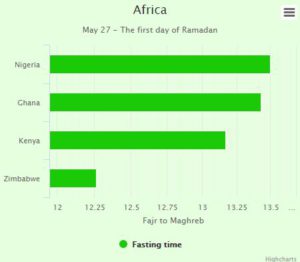 Previous article The Importance And Reward Of Zakaah