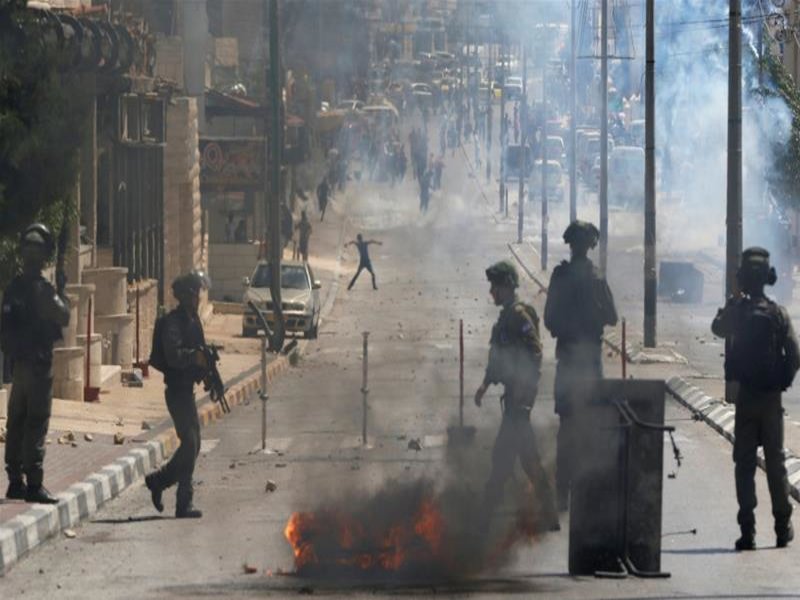 Israeli forces have shot and injured at least 11 Palestinian protesters who staged a general strike in the occupied West Bank, East Jerusalem, and the besieged Gaza Strip in support of hunger-striking Palestinian prisoners in Israeli jails.

Hundreds of protesters blocked roads in cities and towns of the West Bank on Monday. Stores and government offices closed down, public transportation ground to a halt and main thoroughfares in Palestinian cities were empty of people and cars.

The Palestinian Ma’an News Agency said Israeli forces shot and injured the 11 Palestinian protesters during clashes in the West Bank.

The Palestinian prisoners entered the 36th day of the mass hunger strike inside Israeli jails on Monday.

Ma’an estimates that more than 1,300 Palestinians are currently on strike behind bars in Israeli prisons, while Israeli outlets have placed the number in the high hundreds.

The Palestinian prisoners’ affairs committee also called for a “day of rage” on Tuesday, when Trump visits the West Bank, for “the voice of the prisoners to be heard by the president”.

The hunger strike has been led by Marwan Barghouti, a senior leader in the Fatah faction imprisoned for 15 years, who said all other attempts to redress their concerns have failed.

The hunger strikers’ demands include longer and more regular family visits, landlines installed in prisons and better healthcare for the roughly 6,500 Palestinians held in Israeli prisons.

With rights groups and analysts arguing that Palestinian hunger strikers are entering a crucial stage, anger is growing in the streets.

Farah Bayadsi, a lawyer at the West Bank-based prisoner advocacy group Addameer, said hunger strikers have been unable to directly meet with observers from the International Committee for the Red Cross (ICRC).

Despite their declining health situations, many prisoners have been moved back and forth between different jails, Bayadsi told Al Jazeera.

Alaa Tartir, programme director at Al-Shabaka: The Palestinian Policy Network, says Israeli authorities had hoped to break to the hunger strike before the US president’s visit.

“One of Israel’s priorities now, as Trump’s visit looms, is to end this hunger strike and squash solidarity with the hunger strikers in the streets of the occupied West Bank,” he told Al Jazeera ahead of Trump’s arrival. “To achieve these goals, using violent measures and repressing techniques is the panacea for Israel.”

The Israeli Prison Service did not respond to Al Jazeera’s requests for comment.

Trump’s visit
The protests coincided with the current US President Donald Trump visit to Israel and occupied Palestinian territories.

The strike has closed down Jerusalem’s Old City, where Trump will visit Christian and Jewish holy sites later on Monday.

Trump opened his first visit to Israel on Monday, a two-day stop aimed at testing the waters for jumpstarting the dormant peace process.

The last round of peace talks, led by then-President Barack Obama and his secretary of state, John Kerry, fell apart in 2014.

One point of contention is the fate of east Jerusalem, which Israel captured in 1967.

During his presidential campaign, Trump advocated breaking with decades of precedent and moving the US embassy from Tel Aviv to Jerusalem, deeply alarming Palestinians.

He has since said the move was still being looked at.

Diana Buttu, a Palestinian lawyer and former adviser to the Palestine Liberation Organisation, says Trump’s comments about striving for a negotiated solution between Israel and the Palestinians are not promising.

“The time is now for the world to end Israel military rule,” she told Al Jazeera. “It’s not going to come through negations; it’s only going to come through exerted efforts to hold the Israelis accountable by boycotting through sanctions and bringing them before the international criminal courts.”

“That Palestinians have to negotiate their freedom and prove ourselves worthy of freedom is repugnant,” Buttu added, arguing that Trump should use its multi-billion dollar financial support to Israel as weight to pressure it from ending its occupation of Palestinian territory.

“I have very little faith that he will be able to do anything with the Israelis to change their policy,” she concluded. “I don’t anticipate anything positive is going to come out.”