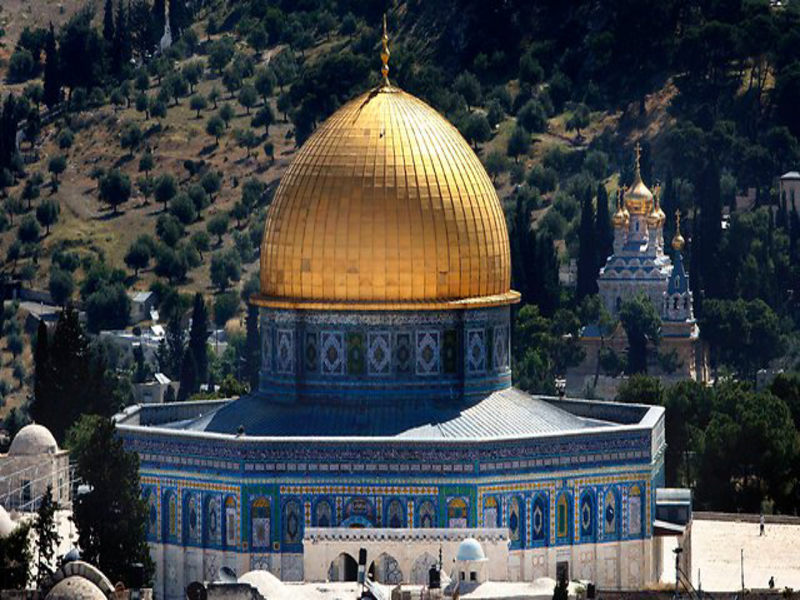 US president has called Israeli-Palestinian peace ‘the ultimate deal’, but has been vague about how to achieve it

US President Donald Trump visits Jerusalem on Monday to seek ways to restart talks between the Palestinian Authority and Israel.

Trump’s visit is part of his first trip abroad as president and follows an initial stop in Saudi Arabia, where he urged Islamic leaders to focus on unity in the fight against “terrorism”.

Trump is due in Tel Aviv on Monday afternoon and, ahead of talks with Israeli Prime Minister Benjamin Netanyahu, will tour two sites in the Old City of occupied East Jerusalem.

His first stop will be the Kaneesat al-Qeyaamah, or Church of the Holy Sepulchre, built at the site where Christians believe Jesus was crucified, buried and resurrected.

Afterwards, he is expected to visit the Western Wall, the holiest site for Jews.

The Western Wall visit drew controversy before Trump even left Washington, when US officials declined to say whether it belonged to Israel.

West Jerusalem has been part of present-day Israel since the 1948 war, which led to creation of the state of Israel and the displacement of hundreds of thousands of Palestinians. From 1948 until 1967, Jordan controlled the West Bank.

But during the June 1967 Middle East War, Israel occupied the remaining territories of historical Palestine – the West Bank, including East Jerusalem, and the Gaza Strip.

More than half-a-million Israelis live in Jewish-only settlements throughout the West Bank, including East Jerusalem, in violation of international law.

While Israel claims to have annexed East Jerusalem, the international community has not recognised that move and considers it occupied territory. The Palestinian Authority sees East Jerusalem as the capital of their future state.

“Can President Trump put Netanyahu in a situation in which he is going to stop settlements, or not. I think this is the real test.

“If Trump can deliver Netanyahu on the issue of settlements, I think we’ll have a good way out. If not, then i think the whole process will be doomed,” Shtayyeh said.

Fawzi Barhoum, a spokesman for Hamas, said Trump will not be an honest broker in future talks.

“He [Trump] has a complete bias towards the Israeli occupation … which is a wrong US approach towards the Palestinian people,” Barhoum told Al Jazeera.

“Trump’s statement concerning the Hamas movement and describing it as a terror group is altering facts and we reject it.”

The United States is Israel’s most important ally, providing it with more than $3bn in defence aid annually.

On Tuesday, Trump will meet Palestinian President Mahmoud Abbas in Bethlehem in the West Bank, visit the Yad Vashem Holocaust memorial in West Jerusalem and give a speech at the Israel Museum.

Negotiations toward the establishment of two separate states – one for the Israelis and one for Palestinians – have in the past proven fruitless. The repeated failure of negotiations has led to increased Israeli settlement activity and even less territory on which a Palestinian state could potentially be established.

Trump has spoken of his self-described deal-making prowess in declaring that the “ultimate deal” is possible, vowing “we will get it done”.

“It is something that I think is frankly maybe not as difficult as people have thought over the years,” Trump said when meeting Abbas in Washington earlier this month.

Trump has sent mixed signals about how he will approach the Israeli-Palestinian conflict.

He cast uncertainty over years of international efforts to foster a two-state solution when he met Netanyahu at the White House in February.

US embassy move ‘shelved’
At that meeting, he said he would support a single state if it led to peace, delighting Israeli right-wingers who want to see most of the occupied West Bank annexed.

At the same time, he urged Israel to hold back on settlement building in the West Bank, a longstanding concern of Palestinians and much of the world.

During his presidential campaign, Trump advocated breaking with decades of precedent and moving the US embassy from Tel Aviv to Jerusalem, deeply alarming Palestinians.

He has since said the move was still being looked at.

Trump’s seeming openness to at least some of Abbas’ concerns has given Palestinians more reason for hope than many may have expected, but still reason to remain wary, some analysts say.

On the Israeli side, Netanyahu heads what is seen as the most right-wing government in the country’s history, and members of his coalition were elated with Trump’s election.

However, Trump’s actions since have left them disappointed, with the embassy remaining in Tel Aviv – at least for now – and the White House seeking to restart peace efforts.

After Israel and the Palestinian territories, Trump will head to the Vatican along with Brussels and Italy for NATO and G7 meetings.