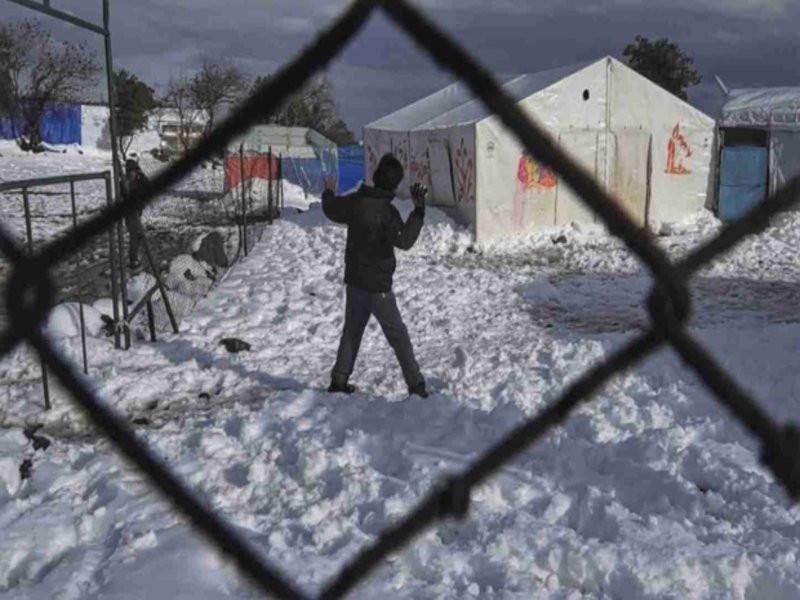 Winters last for a long time in Quneitra province.The first snows fall in southwestern Syria in December or January; the spring melt does not begin until late February or March. With the region’s high elevation, these months bring sub-zero temperatures, high winds and heavy snowfall.

They also bring misery for the 1,200 residents of the ad-hoc Brega camp, which abuts against Syria’s western border with the Israeli-occupied Golan Heights.

Earlier this month a winter storm swept through the camp, cutting off humanitarian aid and destroying dozens of the tents that house 264 families, residents told Middle East Eye.

“We’ve been living on the edge, but today pushed us past our limits,” said Um Husayn, a displaced resident who lives with her family of five.

“About an hour before dawn we felt the sides of the tent caving in. We got outside just before the tent collapsed under the weight of last night’s snow.”

Every year, hope is dashed
Most of the refugees in Brega arrived during the past three-and-a-half years, fleeing air strikes and ongoing battles between government and opposition forces in the province of Daraa.

Two years ago, the camp housed around 600 residents. Now that number has more than doubled.

In better weather, the camp’s residents can typically rely on basic necessities being delivered monthly or even more frequently, courtesy of NGOs, opposition-affiliated local councils and individuals in the region.

But then winter came and all roads into the camp have been closed off. Dozens of tents collapsed. Food and water are in short supply, with no immediate hope of relief.

“The snowstorm was a disaster for Brega camp,” said Ali Hazaa, a camp official, told Middle East Eye. “It was completely unexpected.”

The most recent storm was no more vicious than those in 2016 or 2015. But the cumulative damage is starting to show on Brega’s residents, many of whom are enduring their third winter in snowbound isolation.

Every year begins with hope for a better future, they say, but then each subsequent winter breaks them a little bit more.

Beyond a lack of adequate shelter, many of the camp’s residents said they lacked winter clothing or fuel for heating.
Children wander around barefoot in sandals. Water collects into containers from the ceilings of those tents which are still sanding. And everywhere is the cold.

“For three and a half years we’ve been here, and just like that our lives have been made unbearable by the bitter cold and the snow,” Um Husayn continued. “The wind scattered our belongings.”

‘The world has abandoned us Syrians’
Husayn’s case isn’t isolated. Dozens of tents belonging to some of the camp’s 264 families also collapsed under the weight of snow.

With no other place to go, those affected could only gather their belongings, shake the snow off their broken tents and begin again.

Neighbours gave Husayn and her family shelter for a few nights while the family rebuilt. Two days later they were in their own tent again, still cold, and fearing another debilitating dump of snow.

For the families of Brega, it is becoming more difficult to keep going in the face of such destitution and isolation.
“The world has abandoned us Syrians,” said Hazaa. “There are 264 families here that need medicine, food, and warmth. Why have we been abandoned and marginalised?”