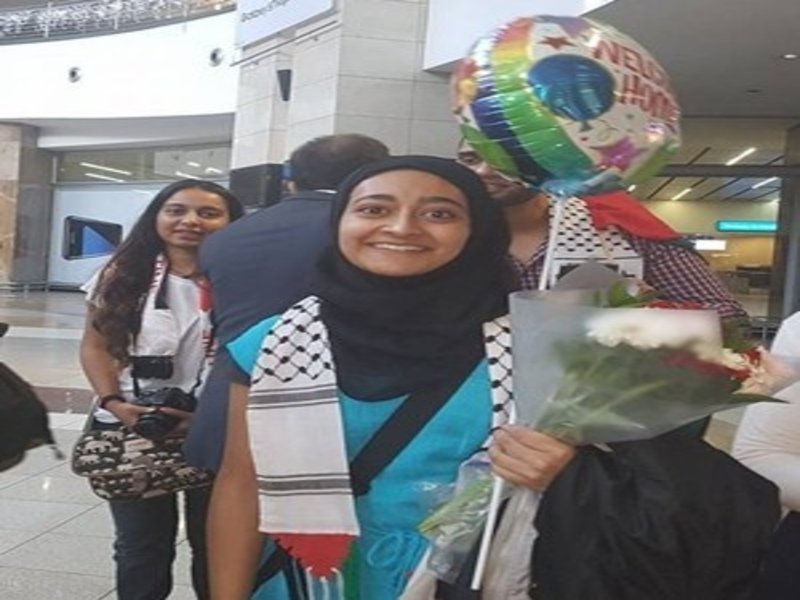 A Wits University student who was invited to a Palestinian youth camp has recalled the horror of being detained in Israel at the weekend.

Laeeqa Sujee, 21, a physiotherapy student at Wits, flew out of South Africa for the camp early on Friday morning.
The purpose of the camp was to visit mosques, temples, churches, and museums as part of a tour of Palestine and the West Bank.

She spoke to News24 after being reunited with her family on Sunday.

From the moment she landed in Ethiopia on Friday night, for her connecting flight to Tel Aviv, Sujee felt she was treated with suspicion.

At Addis Ababa Bole International Airport, her hand luggage was searched and her belongings were swabbed for traces of explosives, in addition to the usual security measures.

Once she and two travel companions landed at Israel’s Ben Gurion International Airport, she queued with her passport for a visa.

“A woman asked me questions about why I am there, where I am going to stay. She asked my father and grandfather’s name and if I knew other people on the plane. I was sent to the waiting room for interrogation.”
A few hours passed. Her father called to let her know that her companions were granted visas.

Sujee said officials first tried to gain her trust in a 20-minute session. In a second session, they asked for more details on her stay.

Connections
“They wanted to know my connections in Palestine and Israel. They got angry when I didn’t have a Palestine connection.”

They apparently went through her phone.

“It was a bit frightening and I gave them my number and email. They happened to know a lot of things about me. They did intensive background checks.”

At this stage, Sujee did not know why she was being detained. She returned to a waiting room, where she sat for a few hours. In a third session, she told a new official that she had heard about Jerusalem and how beautiful it was. She wanted to see it for herself.

He apparently reminded her it was illegal to lie at an international border.

“He started screaming and saying ‘you are part of BDS, which is part of an organisation which wants to kill or destroy my country’.

“He then said he could see I was a good woman who wanted to help Palestinians. He was angry.”

BDS stands for International Boycott, Divestment and Sanctions, a movement that aims to end Israel’s oppression of Palestine.

Deportation order
Sujee said she was forced to sign a deportation order or be arrested. From the airport, she was taken to an immigration facility with another woman.

Two guards escorted her to a cell with six Russian women. The only thing she could keep with her was her Qur’an. From there, she was moved into solitary confinement for eight hours.

“They gave me a grey dog blanket, a grey sheet, and a toothbrush. They brought food but it was not Halaal. I ate a bun that was starting to rot.”

A traumatised Sujee said she was eventually taken back to the airport, where she had to undergo another security check.

“They took out my hand luggage and you could see they were upset they weren’t finding anything.”

At this point, a female official put her hand under her bra and around her underwear to search for items.

A metal detector made a sound when it was passed over her jeans button and she was subjected to a full body search.

“I was humiliated. I had to take my pants down to my knees. She put her hand on the inside of my panty lining and put the metal detector there.”

Sujee said a guard walked her to the plane and airline crew were ordered to only give her passport when she landed at OR Tambo International Airport in Johannesburg.

Her relieved family were there to welcome her.

Sujee said her memories were the only evidence of what had happened. She does not know why she was not granted a visa.