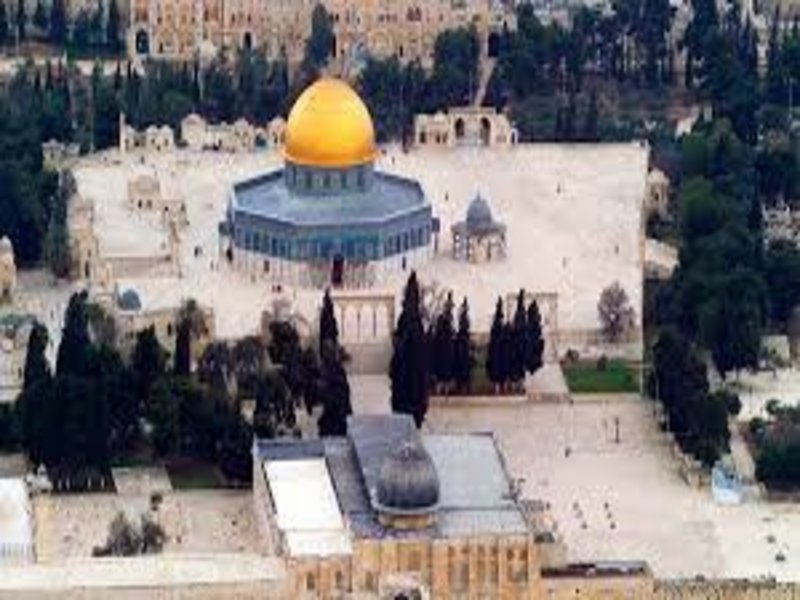 Maan -The Israeli Ministerial Committee on Legislation discussed on Sunday draft legislation which could limit the Muslim call to prayer in Israel, as Palestinian citizens of Israel expressed their fears that such legislation would represent a severe violation of freedom of religion.

In a cabinet meeting on Sunday, Israeli Prime Minister Benjamin Netanyahu stated that the committee was set to “consider draft legislation on limiting the magnitude of noise from public address systems in houses of prayer in Israel.”

The call to prayer — also known as the adhan — is broadcast five times a day from mosques or Islamic centers.

The bill calls for barring the use of loudspeakers for any religious or “inciting” messages as part of the call to prayer.

It remained unclear on Sunday evening if the committee had made a decision regarding the bill.
“I cannot count the times, they are simply too numerous, that citizens have turned to me from all parts of Israeli society, from all religions, with complaints about the noise and suffering caused them by the excessive noise coming to them from the public address systems of houses of prayer,” Netanyahu said.

“Israel is a country that respects freedom of religion for all faiths. Israel is also committed to defending those who suffer from the loudness of the excessive noise of the announcements,” he added. “I support similar legislation and enforcement in the State of Israel.”

While Netanyahu used the non-denominational term “houses of prayer,” the issue of the Muslim call to prayer — or adhan — has come under the spotlight in recent weeks, most likely leading to the resurgence of the bill, which was first presented in March by Knesset member Moti Yogev of the Jewish Home party.

Locals said that Israeli authorities banned the dawn adhan from being projected over loudspeakers in three different mosques in the Jerusalem district town of Abu Dis earlier this month, a day after Israeli settlers protested in front of the house of Israeli Mayor of Jerusalem Nir Barakat over the “noise pollution” caused by the Muslim call to prayer.

A number of Palestinians with Israeli citizenship slammed the bill on Sunday as yet another instance of discrimination against non-Jewish citizens of Israel.

“Should this bill be passed, it would be a devastation of democracy in this state,” the imam of the al-Jazzar mosque in the northern city of Acre, Sheikh Samir Assi, told Ma’an.
He added that such a bill would cause a “relapse in the relations between Arab and Jewish” citizens of Israel.
This legislation, the religious leader argued, would make Muslims in Israel feel that they and their religious sites “have no existence in this state.”

“Anyone who cares in this state should raise their voice against this law which reflects racism, hatred and incitement against the Palestinians in this country,” Assi added.

Meanwhile, MK Ahmad Tibi of the Arab Joint List said the bill was the latest of “frequent attempts to harm the feelings of Muslims, under the trivial pretext of preventing noise.”
He advised advocates of the law to “retract their provocations.”

Meanwhile, Adnan al-Husseini, the Palestinian Authority (PA)-appointed governor of Jerusalem, told Ma’an at the time of the anti-adhan protest that the sound of the call to prayer didn’t rise above an agreed-upon decibel level, adding that Israeli settlers were not annoyed by the noise, but by the call to prayer as a reminder of Palestinian presence in Jerusalem.

Earlier this month, Hatem Abd Al-Qader, a Fatah official in charge of Jerusalem affairs, told Ma’an that Israel aimed to provoke Muslims by attempting to ban the call to prayer.
Abd al-Qader said that Israeli settler protest against the adhan came amid constant violations and raids of the Al-Aqsa Mosque compound in East Jerusalem’s Old City, and demolition of Muslim graves in Jerusalem, which he said were part of a broader Israeli plan to destroy the Palestinian Muslim and Christian identities of Jerusalem and replace them with a Jewish one, turning the Israeli-Palestinian political conflict into a religious one.

Palestinian communities in Israel and occupied East Jerusalem have long been targeted by discriminatory Israeli policies, whether through “divide and conquer” tactics, attempts at forcibly displacing Bedouin communities, and what has been denounced as a policy of “Judaization” of Jerusalem at the expense of other religious communities.