Some US Muslims support Trump? 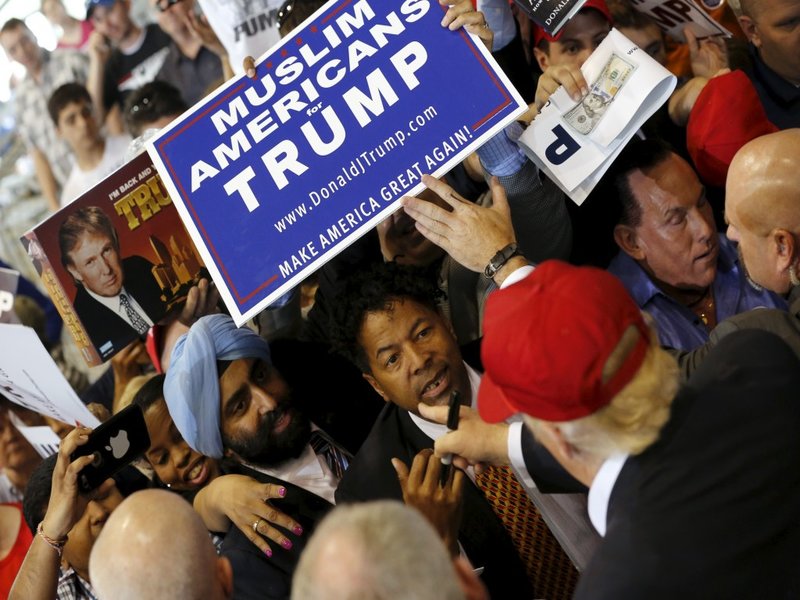 Muslim Americans from both sides of the political spectrum are anxiously awaiting the results of Tuesday’s elections and hoping that the community can begin mending the wounds inflicted during the divisive electoral cycle.

Shahed Amanullah, a Virginia-based supporter of Hillary Clinton and former State Department employee, said that looking back on the elections, he’s surprised the issue of Muslims came up as often as it did, given the relatively small size of the community in the United States.

“It was a campaign issue that is talked about as much as foreign policy, the economy and healthcare,” he said. “It seems odd and weird that we’re so much in the centre of attention.”

Amanullah noted that, in his view, the negative comments about Muslims made by Donald Trump and some of his supporters might have a positive effect on the community in the long-run.

“For every Trump effect, there is a reverse Trump effect. Just as we’ve had Trump activate a lot of anti-Muslim sentiment in this country, we’ve had the Democratic party and Hillary Clinton react in kind with positive portrayals of Muslims,” he noted. “And for anyone who didn’t believe that anti-Muslim sentiment existed, it’s been laid clear this year..it’s good we see this evil for what it is so we can mobilize to confront it.”

“It’s hard, and there have been a lot of difficult conversations with my children and other people, but I am very heartened by the outpouring of support from a lot of Americans, I’d even venture to say most Americans,” he added. “It’s better than fighting anti-Muslim sentiment in the shadows. Now we’re fighting it as a country to highest levels.”

Looking towards Tuesday’s elections, Amanullah said he was prepared for any eventuality.
“I’m not confident. I’m not panicking, but I do have faith that things will go well,” he said. “Frankly, if things don’t go well, that’s just another challenge we’ll have to face.”

A Maryland-based Muslim and Clinton supporter, Tariq Maalouf, said “he just wanted it to be over.”
“The campaign rhetoric was very painful to listen to,” he said. “I hope Clinton wins so we can get past this sort of language regarding Muslims.”

Muslims for Trump?
Contrary to popular belief, not all Muslim American voters support Clinton.
New Yorker Fred Nezami, for example, is Chairman of “Muslims for Gary (Johnson)” and campaign manager for Usman Ali, a Muslim Republican running for the New York State Assembly.

Nezami told Khaleej Times that on Tuesday, he’s hoping for Trump to win, even though he is casting his vote for Gary Johnson in the hopes that his third party receives five percent of the vote and is eligible for federal funds in future elections.

“I’m voting for Gary Johnson, but I’m hoping Trump will win,” he said. “I’ve donated to Donald Trump so that he can use that money in swing states so he can win there.”

Trump’s comments about Muslims – such as his proposed blanket ban on Muslims coming to the United States – are not a concern, Nezami said.

“I know that Muslims in New York at least have a Muslim Democratic club. I’d like to do something similar for the Republicans so that Muslims can have a voice in both parties,” he said. “When our voices are heard, it will be harder for politicians to ignore or demean us.”