Rohingya seek reparations from Facebook for role in massacre 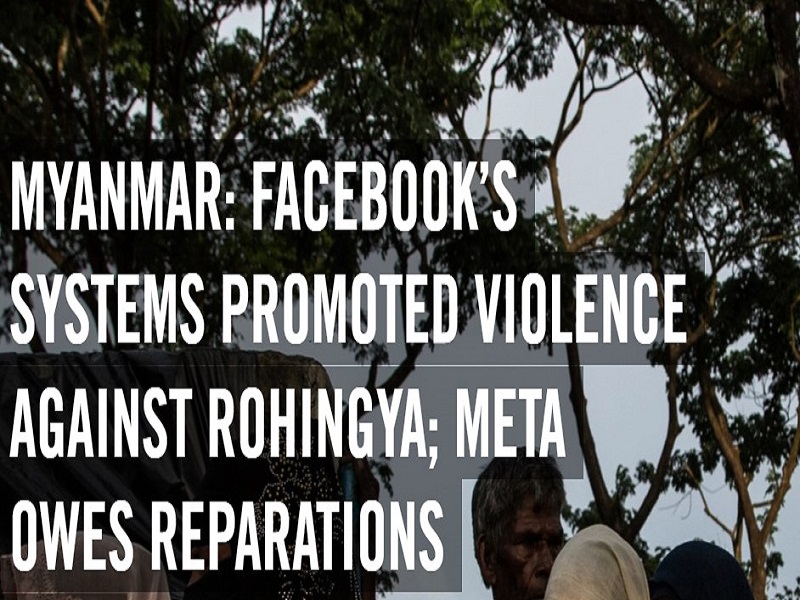 Facebook owner Meta’s dangerous algorithms and reckless pursuit of profit substantially contributed to the atrocities perpetrated by the Myanmar military against the Rohingya people in 2017, Amnesty International said in a new report published today.

The Social Atrocity: Meta and the right to remedy for the Rohingya,details how Meta knew or should have known that Facebook’s algorithmic systems were supercharging the spread of harmful anti-Rohingya content in Myanmar, but the company still failed to act.

“In 2017, the Rohingya were killed, tortured, raped, and displaced in the thousands as part of the Myanmar security forces’ campaign of ethnic cleansing. In the months and years leading up to the atrocities, Facebook’s algorithms were intensifying a storm of hatred against the Rohingya which contributed to real-world violence,” said Agnès Callamard, Amnesty International’s Secretary General.
“While the Myanmar military was committing crimes against humanity against the Rohingya, Meta was profiting from the echo chamber of hatred created by its hate-spiralling algorithms.

“Meta must be held to account. The company now has a responsibility to provide reparations to all those who suffered the violent consequences of their reckless actions.”

Internal studies dating back to 2012 indicated that Meta knew its algorithms could result in serious real-world harms. In 2016, Meta’s own research clearly acknowledged that “our recommendation systems grow the problem” of extremism.

Meta received repeated communications and visits by local civil society activists between 2012 and 2017 when the company was warned that it risked contributing to extreme violence.

In 2014, the Myanmar authorities even temporarily blocked Facebook because of the platform’s role in triggering an outbreak of ethnic violence in Mandalay.

However, Meta repeatedly failed to heed the warnings, and also consistently failed to enforce its own policies on hate speech.

Amnesty International is today launching a new campaign calling for Meta Platforms, Inc. to meet the Rohingya’s demands for remediation.

Today marks the first anniversary of the murder of prominent activist Mohib Ullah, chair of the Arakan Rohingya Society for Peace and Human Rights. Mohib was at the forefront of community efforts to hold Meta accountable.