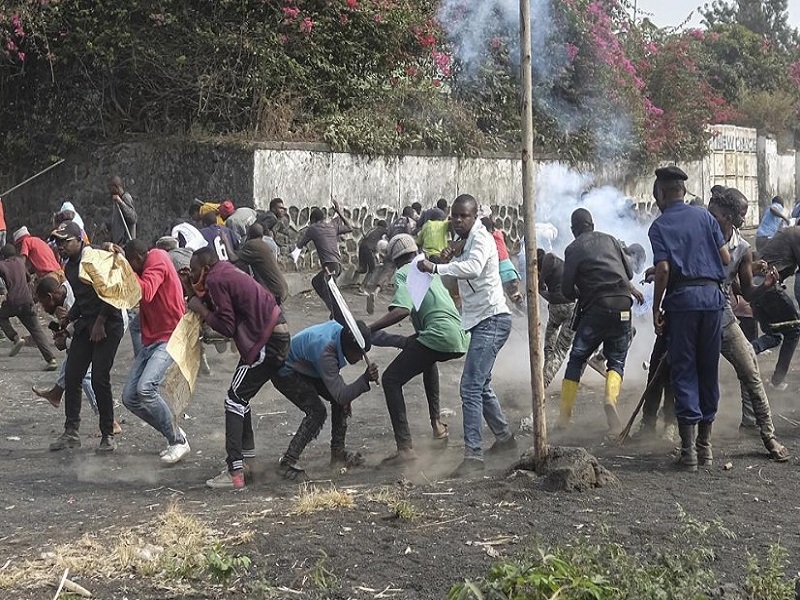 Four people participating in demonstrations against the United Nations peacekeeping mission in eastern Congo were killed Wednesday when a high-voltage power line fell on them, officials said.

Their deaths came on the third day of anti-U.N. protests. At least 15 people, including three U.N. personnel, died and more than 60 people were injured during the earlier demonstrations, Congolese government spokesman Patrick Muyaya said.

Andre Byadunia, a civil society coordinator in the city of Uvira in South Kivu province, said the four demonstrators were electrocuted when a power cable gave way in the Kilomoni district.

Uvira Deputy Mayor Kyky Kifara confirmed the incident and said he was at the demonstration site when the cable fell. He said he thinks the death toll could have been higher if police and security forces had not already dispersed the crowd.

“I was there, I’ve been there since morning. There was a bullet that cut a high-voltage wire. I almost died myself. Luckily, I barely escaped,” Kifara said.

Khassim Diagne, acting head of the U.N. peacekeeping mission, said later in the day that in the protests Monday and Tuesday, seven Congolese civilians were killed in Butembo in North Kivu province along with one U.N. peacekeeper from Morocco and two U.N. policemen from India. Five people were killed in eastern Congo’s main city, Goma, including an army officer hit by a stray bullet, he said.

Diagne said in a virtual news conference from the Congolese capital, Kinshasa, that he had just been told that things in Uvira, where the electrocutions took place, “are now getting increasingly under control.”

Elsewhere, Diagne called the situation “fragile,” and said reinforcements from the United Nations and Congolese security forces were securing U.N. bases and installations. He welcomed a strong statement by the governor of North Kivu on Tuesday night banning protests and calling on demonstrators to move out of the streets.