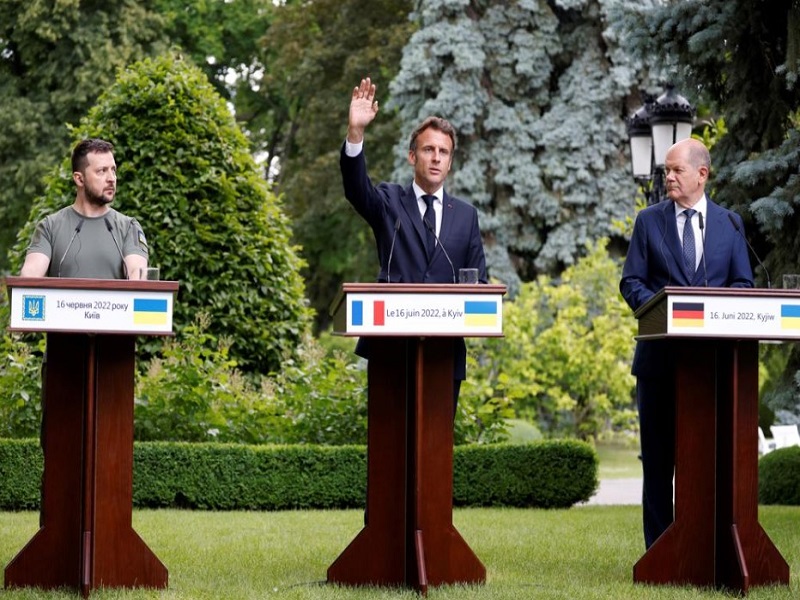 Four European leaders expressed their support for Ukraine on Thursday while meeting with President Volodymyr Zelenskyy, vowing to back Kyiv’s candidacy to eventually join the European Union and offering more weapons to fend off Russia’s invasion.

French President Emmanuel Macron promised Ukraine six more truck-mounted artillery guns, the latest in a new round of Western arms pledges as the war grinds on in the Donbas region in the east.

France, Germany, Italy and Romania “are doing everything so that Ukraine alone can decide its fate,” Macron said at a news conference with Zelenskyy and the others.

Amid Ukrainian fears that Western resolve could wane, the visit carried heavy symbolism. France, Germany and Italy have all faced criticism for continuing to engage with Russian President Vladimir Putin — and failing to give Kyiv the weaponry it says its needs.

With Scholz beside him, Macron defended earlier comments that riled Ukrainians about not humiliating Russia, solemnly noting how the end of World War I had sown the seeds of World War II.

Ukrainians and some of their European neighbors have been afraid that Western powers might press for territorial concessions for the sake of peace.