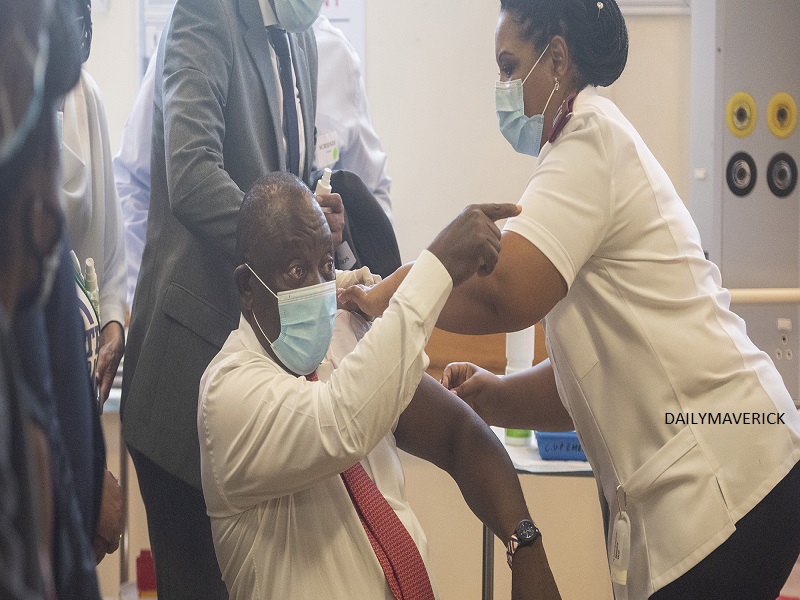 In a historic moment for South Africa, President Cyril Ramaphosa has received his COVID-19 jab. The country’s first citizen is with of a group of health workers being vaccinated at the Khayelitsha District Hospital, in Cape Town, today.

Ramaphosa addressed the media after his vaccination saying it happened so quickly and so easily. He explained that it was just a prick on his flesh and that he really did not feel much pain. Health Minister Zweli Mkhize has also received his jab.

The first 80,000 doses of the Johnson & Johnson COVID-19 vaccine have been dispatched to 17 sites across the country as part of an implementation study starting this afternoon. They arrived at the OR Tambo International Airport last night.

Because the vaccine has been studied in South Africa, the South African Health Products Regulatory Authority approved an extension of the study that will allow healthcare workers to be vaccinated before the vaccine is officially licensed.

A shipment of 2,000 Coronavirus vaccine doses donated by Russia entered the besieged Gaza Strip today after Israel blocked it earlier this week.

Palestinian and Israeli officials said the shipment, sent by the Palestinian Authority (PA) from the occupied West Bank, included doses of Russia’s Sputnik V vaccine, enough to inoculate 1,000 people in a two-shot regimen.

The PA has said it will share its vaccine supply with Gaza, where Hamas has been in power since a violent power struggle in 2007. This is the first time that the enclave, which is home to more than two million Palestinians, receives vaccines.

Authorities there have reported more than 53,000 infections and at least 537 deaths since the start of the pandemic.