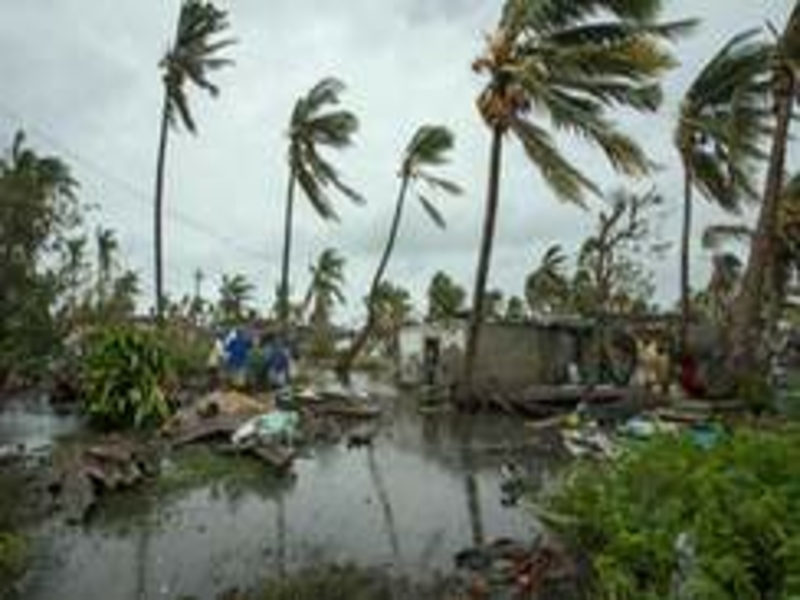 Alhumdullilah! Allah has given me the time to write what was hard to write… Just hearing there’s another cyclone to hit Mauritius draws me back to the scene…

Though having alerts and warnings, we placed our trust in Allah.

Yes, we have never experienced such a tremor and because its arrival dragged we thought that it wouldn’t be as serious or dangerous.

As the time drew closer we placed our trust in Allah, teaching and talking to the students the greatness of Allah.

Was Allah making us build the strength of Iman in what was coming up?

The Quran sabak (lesson) being recited by the students consists of Ayahs talking about the wind, how Allah subdued the wind, his creation n power, the topic of Qawm e Ad, their destruction, the signs of Qiyamaha, the explanation of the trumpet being blown and how it will be a little sound growing gradually becoming unbearable.

Then the wind began to blow. I recall a loud whistling sound that continued on Thursday morning. As a precaution,school and madressa was cancelled.

The wind continued, I was getting irritated. The noise, the hustle confused me. As a mother, I felt like I didn’t know what and how I was cooking.

I remember telling Moulana(my husband) that I don’t know how I had cooked on that day  I recall telling him that my head felt empty like a drum.

That Afternoon I frantically walked from one window to another, looking at the sky, that noise wouldn’t go. It was now getting darker, no blue skies anymore. Trees began blowing profusely, the weather started getting gloomy.

Just then, the phone rang… it was mum. She was worried and asked us to move out. I told her there’s nothing to worry about and that she should go to bed.

And you will see men as they are intoxicated and they are not intoxicated but the torment of Allah is severe.

We had dinner earlier than usual that evening. Meanwhile outside, the wind speed grew stronger and stronger. I noticed the car shade was moving. By now, the workers couldn’t get to there rooms as the wind was very strong. My phone was inundated with messages about concerned friends and family asking about the situation.

The kids were becoming scared so we all went upstairs and started making dhikr.. We began reciting durood,laailaha illa anta,ayat e kareema,duas for protection,ayatul kursi etc.

We were interrupted by a phone call.  The person called to say that two classes at the madressa where Moulana teaches were gone… blown away. This upset Moulana a lot.

A feeling of anxiety set in, I suggested we go downstairs as I found it safer. Moulana then said that I should go downstairs with the children and he will remain ustairs incase anything should happen… I refused. We all stayed together upstairs.

We settled into bed when I took note of dripping sound. I followed the sound to the boy’s room only to find that water was leaking drop by drop through the ceiling.

I then alerted Moulana, he went to investigate.

Just as he opens the room door. Bang! The ceiling comes crashing down.

Fear began racing through all our bodies. Moulana then said the kids and I should go downstairs immediately, while he frantically tried to grab important documents, etc from the room.

In this moment of fear the phone rings. It was my dad. He saw messages of homes destroyed and called to ask why we had not moved out at the onset of the cyclone, worried, he asked us to move out immediately. I recall telling my dad not to worry and just to make dua, as duas were all that were needed at the time. While speaking to dad the lights went out, next the network became scratchy and then the lines cut….

The wind grew stronger and stronger. A morbid feeling overcame us, walaahi a feeling like the pangs of death was near.

Such a state of confusion and terror that one minute we are in Sajdah,

begging of Allah to save us; Nasrullahi ( the help of Allah) was needed (iyaka nabudu waiyyaka nastaeen – You alone do we worship and You alone do we seek help) begging Allah from the bottom of our hearts.

It felt like the rooh ( the soul) was coming out, painful, like what a mother endures during labour.

It was chaotic, I recall running to the toilet, wanting to vomit and then renewing my wudhu and supplicating to Allah to calm the wind.

But the wind became more intense threatening to break through the windows beating  and fighting.

We have shutters on our windows so nothing could be seen outside. However, it makes the interior very dark and hot.  The darkness and humidity resulted in us sweating and it made me think about that Day when we will be drowning in sweat)

Alhumdulillah the kids fell off to sleep earlier, although waking up during the night at intervals. I go towards the kitchen to find that water has entered. Quickly I tell the workers to shift to the lounge.

As the wind blew more intense. One by one ceiling of the four rooms upstairs began to go down, the sound of wind swirling and things falling could be heard.

Oh Allah! My Taubah! My Taubah, Please forgive us! Is it time that no Taubah will be accepted? Could maut be waiting by the window?

Next thing, As I get up again and walk towards the door  I find my feet in water. I notice that the water is flowing down the steps from upstairs, quickly we wake up the workers and we all get broom, mops or anything to push the water towards the kitchen, away from the room and lounge. Frantically we get towels, clothes, curtains etc to act as a barrier to prevent the water from coming towards our direction. With that under control, we tell the workers to go get some sleep.

It’s now after 12 am and everyone’s roof iron sheets are flying around, while the banging keeps on getting louder.

We cut cardboard and put it on the window.

With thoughts racing through mind I ask Moulana, the guard was outside in his room, will he be safe? What about the dog the cat?

I think to myself ‘Allah there is no way out. In shaa Allah they will be safe, the roof is strong!

At 2 am the noises became louder, I suggested to Moulana that we move to the dining room out of fear that these windows might break.

The direction of the wind was changing.

Moulana began calling out the azaan in different corners of the house.

I beg Allah. “Oh Allah please calm down, we won’t do it again. Please!

Its a  Thursday night, nafsi nafsi nafsi, such a situation we are in and on that day which will be worse. My beloved prophet will be saying umati umati umati! For our Prophets (Saw) sake please calm down the wind.”

The wind carried on. I ask forgiveness from my husband “please make me maaf”.  He said,”don’t be silly we going to be fine.”

Just then the kids wake up, I ask them for forgiveness as well.

Its fajr time, we prayed namaz but the wind carried on. It became worse at 5:00am and then began getting less(less means still high but lowering)

How long did it last

It carried on during the day but lowering itself. The hustling sound remained but there was no blue sky. There was just darkness. Everyone in their homes, shocked, confused, can’t move.  What’s happened?

The sheets were still moving around but the garage is gone, walls are broken, roofless homes. Alhumdulillah the guard, cat and the guard dog were all ok. Subhanallah! If Allah can look after the animals will he not look after Ashraful makhlooqat?

Ya Allah! Dunya Dunya, what a lesson! No network, no lights, no clean water, no electric fence, no cameras, cars damaged, gate jammed-cant open. .One by one gone.

But that was not the real pain. The real pain was time. All that free time I had wasted, occupied by fixing n cleaning, cleaning what?

Makes you think. We don’t need extra things in life sisters. How many clothes toys we have. The same things we spent so much time cleaning up and shouting at kids for not messing is now stinking and thrown away?

Like how the Dunya is not even valuable than a mosquito in the eyes of Allah?

That time I had and spent idol now I’m busy redoing and cleaning up the mess. I wish I could’ve used it wisely. WalAsr ( Allah take the qasm of time)?

I’m tired cleaning .. would it not be easier if we lived like a traveller in the world? How many clothes do we use? How many we don’t? Lucky I’m available to clean my stuff.. what if I wasn’t and someone else had to?!

I know my Allah tests us. There are people in different worse situations, some that have lost their beloved and more, but down there I definitely know he will give us better. However, my main ibrat lesson is Time. Value it before it’s late. Use it correctly. Use the time with our children to make each moment better and useful and I tell u – let’s make shukr.

The long showers and clean water we waste. Allah has given us so many nemats, electricity, everything in order and place, clothes ironed, etc.

4-5 days no sunshine! Sunlight itself is a great nemat from Allah. Think of the fear of our Muslim brothers and sisters who have the fear of death every minute with bombs and gunshots, this cyclone we experienced passed, but what about them? Their fears?

I was so traumatised I couldn’t sleep for about five days, I couldn’t let the window be open at night. Something kept waking me up saying I’m coming to get u? Yes, what about them??

Our network was gone for 5 days. Then we heard we could go by the airport road to make calls.

We didn’t have the world news or reports to know that roads to Beira have been cut or damaged. I waited for my parents or someone to come.

Alhamdulillah, after 5 days I talked to them. But Allah knows why all that came in late so that we could stand up move and carry on, before the calamity he sends down sabr or we couldn’t bear it.

But the saddest thing is life carries on with so much sin.

Yesterday we went to visit my mother in law and being a Sunday, I noticed that the bars were open, banging music all over and so much fitnah was taking place all around the streets. Then you ask yourselves. How can we be protected? Are we doing our tasks? How can we help them? How can we help them towards the light? Should I continue to stay here or should I leave??

May Allah guide us all… Ameen