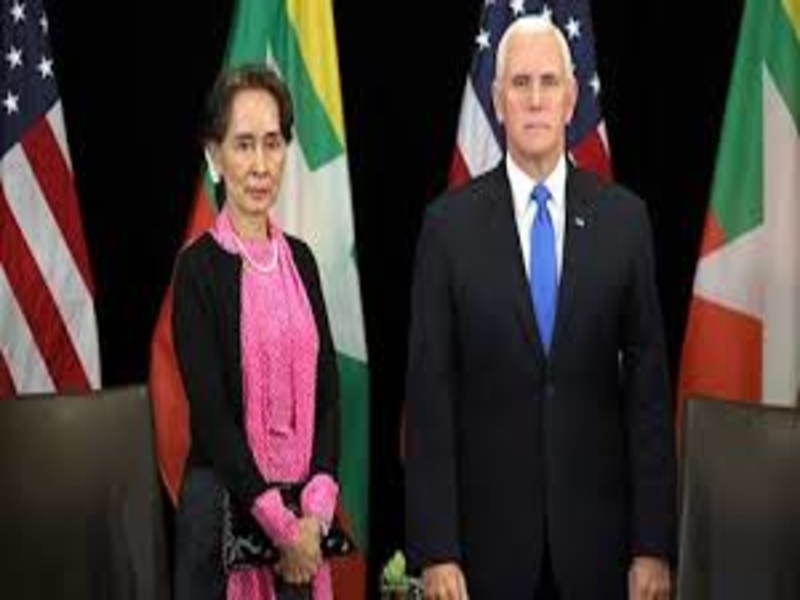 US Vice President Mike Pence told Myanmar leader Aung San Suu Kyi on Wednesday the violence and persecution by her country’s military and vigilantes that sent more than 700,000 Rohingya Muslims fleeing to Bangladesh was inexcusable.

Pence told Suu Kyi in a brief meeting with the media before private talks on the sidelines of an Asia-Pacific summit in Singapore the United States was anxious to hear of progress in holding people accountable for the Rohingya crisis.

“The violence and persecution by military and vigilantes that resulted in driving 700,000 Rohingya to Bangladesh is without excuse,” he told Suu Kyi.

Pence’s comments follow criticism from Malaysia’s Prime Minister Mahathir Mohamad who said on Tuesday the Nobel laureate was trying to “defend the indefensible” in backing Myanmar’s military over the brutal crackdown.

‘Indifference’
Mahathir is known for his forthright views, but such public rebukes are rare among ASEAN leaders.

Suu Kyi became a democracy icon during Myanmar’s long years of military dictatorship when she spent some 15 years under house arrest.

But the treatment of the Rohingya and the response of Suu Kyi’s government have fuelled widespread criticism.

Human rights group Amnesty International this week stripped her of its highest honour over what it said was her “indifference” to the plight of the Rohingya.

Pence also said Washington wanted to see a free and democratic press in Myanmar, and the jailing of two journalists last year was “deeply troubling” for millions of Americans.

He did not mention by name Wa Lone and Kyaw Soe Oo, two Reuters journalists who were arrested in Yangon in December 2017 as they worked on a story about the Rohingya crackdown.

They were found guilty in September of breaching the Official Secrets Act and sentenced to seven years in prison.
Bangladesh and Myanmar plan to start repatriating some Rohingya this week.

The UN has said the move would put their lives at risk and should be stopped amid ongoing attacks against the Rohingya who remain in the predominantly Buddhist country.