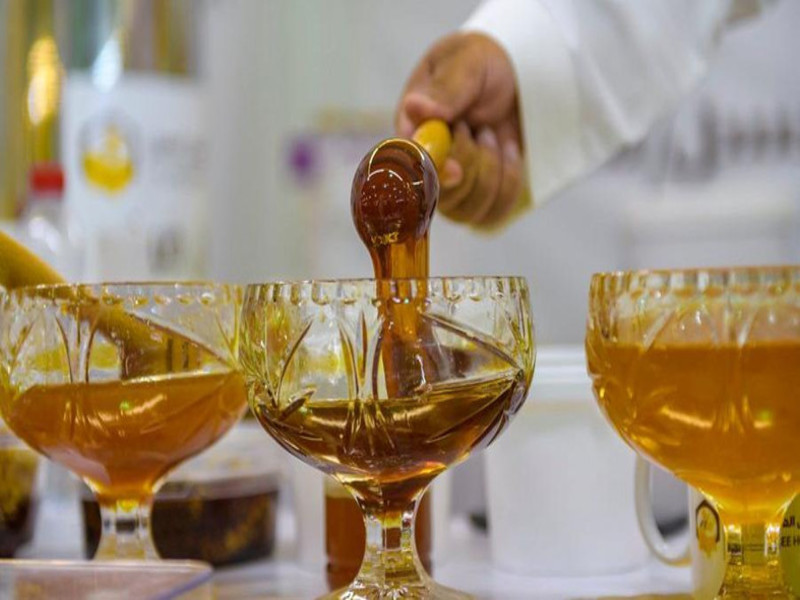 Thousands of visitors have flocked to the 11th Honey Festival currently being held in Saudi Arabia’s region of al-Baha.

Saudi Press Agency released photo showing a tour of the festival with its distinguished activities and events, which included honey products through the exhibition that includes more than 30 booths, in which 30 beekeepers displayed their own products.

SPA spoke to Ali bin Abdullah al-Umari, who noted that there are different types of honey such as Sider, Taleh, Samar, Selm, Dahi, Kadad, Summer, Sahah, Barseem, Spring, Citrus and other species that are displayed by the beekeepers inside.

These types of bee, he said, could be differentiated by color; Sidra is reddish yellow, al-Shawka is black, while the Hungarian honey is white, it is considered rare. These good types lures a lot of people to buy honey. Honey is distinguished by the special smell and taste which helps to identify the type of the honey either by tasting or smelling it. All types of honey has a special smell which is determined by the plant origin from which honey is taken.

Met’eb bin Ahmed Al-Ghamdi, the beekeeper who graduated from the Beekeepers Association Institute in al-Baha, said that he joined the Institute in its third round. From which he received five beehives and bee supplies, in addition to information about bees and honey harvesting. Then he continued to work in this field and now he owns about 80 beehives that produces all types of honey.

Nasser bin Saeed al-Ghamdi, the beekeeper who participated in the International Honey Festival from its first round till this year; said that he managed to make combinations of nuts to be mixed with honey.

In addition to concentrated royal jelly, amber, bees glue and he can make honey upon the customer’s request. He asserted that this mixture does not affect the honey. He participated in international competitions; last of which he got the third place on Europe in nuts honey.

As for Abdullah bin Mohammed Al Zahrani, the festival’s supervisor, he talked about the festival’s activities and events. It included honey exhibition tent, various theater activities, honey’s friends’ corner, photography and plastic arts exhibition, artisans, folklore shows, honey café, poetry corner, child corner and the young tourist. In addition to workshop for murals, honey train, puppets, games and motorcycles shows, and a dedicated post office for Saudi Post at the festival, where about 3 tons of honey had been shipped since the opening so far.