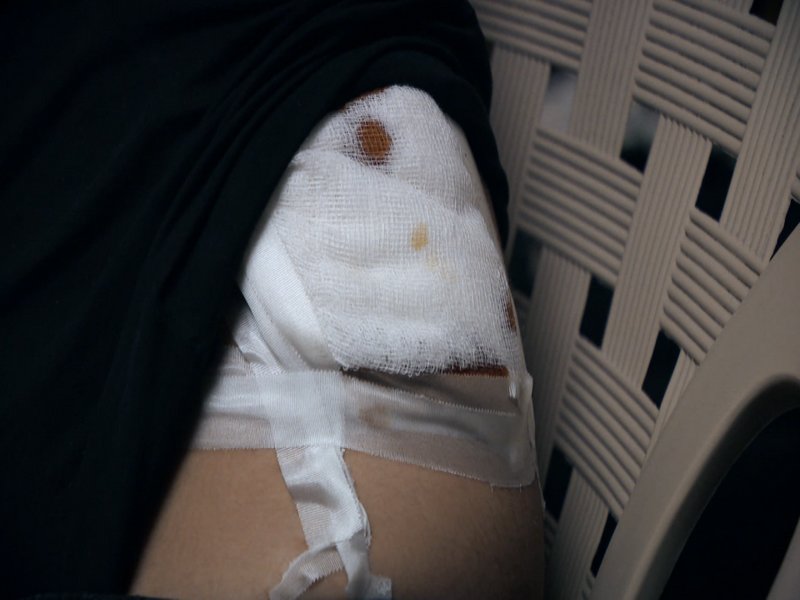 Abu Ahmad escaped the war in Syria in 2013 and moved to Lebanon to survive. But homelessness and poverty drove him to trade the only thing of value he had — one of his kidneys.

“Poor people have only one thing and that’s their health,” Ahmad told TRT World. “I sold mine. Instead of moving forward, I went backwards, very backwards.”

He lives in a slum, in a tiny windowless room. His new home has four walls made of grey bricks piled up on each other. A piece of wood on a stack of stones serves as a kitchen table. A single bulb hanging by a wire is the main source of light, but only when there isn’t a power outage. He spends most of his days in darkness.

“It’s like I have fallen into a well, I scream for help but no one answers. No one even sees me,” Ahmad, 45, says.
Ahmad is one of some 1.5 million Syrians in Lebanon. About 70 percent of them fall below the poverty line. Syrian refugee population comprise 25 percent of Lebanon’s 6.7 million people. Beirut tightened its residency policy two years ago, making it harder to obtain legal status.

Ahmad struggled to earn a living wage. As his hunger grew, the option of selling one of his kidneys became increasingly appealing. “I was starving, beyond starving,” he says. “I felt hunger in my body and in soul. Hunger drove me crazy.”

In 2015, a broker paid him $1,000 in advance. He then waited for the phone call from the middleman charged with shepherding donors to surgery rooms.

Two years after the surgery, the broker refused to give him the promised sum of $8,000. He had to settle with the initial advance, most of which disappeared on post-surgery medications.

Like Ahmad, many poor Syrians are facing the risk of illegal body organ trade, which generates between $840 million and $1.7 billion a year, according to the Global Fund Integrity. And if the final price for a kidney on the global market is as high as $100,000, the donor gets a meagre share of $5,000 or less.

It took us weeks to secure an interview with a body organ racketeer. In this shadowy business, maintaining silence is crucial, and those at its heart avoid media exposure. Yet one such man, who goes by the name of Abbas and works for a gang of human organ traders, somehow agreed to speak to TRT World. In late September, he gave me an appointment to meet in one of his hideouts in a Beirut slum.

For a leader of such a dark trade, it seems like an audacious gamble to base his hideouts in this clustered low-income neighbourhood, where regular families live in rundown buildings.

As I reach the agreed location, he cancels the meeting saying he has to deal with other business. Later, however, he admits he had me followed by one of his aides to check if I was an infiltrator from the police or the army.

A tall and muscled man with a deceptively kind-looking face, he shows no remorse for what he does.

“If I could sell all of Syria I would. Business is business,” he says, with a smirk.

He deals with kidneys, eyes and livers. He can provide any organ the market demands. “Donors are laying on the streets,” he says with a confidence of a regular businessman. “I don’t have to look for them, they come to me.”

Just before the interview, he was smoking a joint and snorting cocaine. The entire neighbourhood knows and fears him. He always carries a gun. Pointing to a bullet mark on the wall, he says some people came after him and that “they are not here anymore.”

Two types of gangs are instrumental in this business, Abbas says. One deals with finding the donors; the other carries out surgeries with the help of rogue doctors. Though the two gangs work in tandem, they tend to keep their members and paths separate.

“We work together, but we don’t trust each other,” he says. “I drop the donor at a place for someone else to pick him up. All I know is my patient goes in with two kidneys and comes back with one.”

Abbas’ biggest concern is the donor’s medical condition, “The day after the surgery, I’m instructed to take care of them. For 15 days or a month, it depends on each case. I make them rest, and I check if they’re taking their medicines and if they are in pain. I am relieved when they leave my place. That’s when my job ends.”

He says he is proud that no one under his watch has died, mainly because any fatality would have given him “bad publicity”.

But severe health complications after the surgery are inevitable. For instance, Ahmad can no longer even drink tap water without falling sick all the time. He has also lost weight.

To provide food for his family, he now collects garbage on the streets, which gives him just enough money to feed his wife, son and a newborn child. “I feel I am on a deadly trajectory … Sometimes I feel it’s like a dream. But when I feel the pain, I know it’s not.”

Abu Ahmad lifts up his sweater and shows me the scars on his belly. “They opened me twice,” he says, “I don’t even know what they did inside [me]. They took my kidney and they threw me away.”

After the surgery, Ahmad called the phone numbers the middleman had contacted him from, seeking the rest of the money they owed him. But all the numbers were disconnected, “When I finally found them, they threatened me.”

Duping Syrian refugees into selling their organs and threatening them has become an all too common practice in Lebanon since the war erupted in Syria in 2011. Abdallah, another Syrian refugee in Beirut, is another recent victim.

On our meeting in late September, he just had his kidney removed a few days earlier. He made the choice as he feared poverty might force his mother and sister to prostitution. He is resting on a mattress in a filthy room in a bustling slum.

“I would never recommend this to anyone unless they have good reason … I had one,” he says, resisting bouts of post-surgery dizziness.

He is exhausted and can barely walk. The bandage that surrounds his flank is soaked with blood. He wants to recover quickly. He has a plan, “I got $3,000, and they will give me $5,000 more by smuggling me to Europe.”

But Abbas, the trader, already sold Abdallah’s kidney for $25,000. He told me he would never arrange Abdallah’s trip to Europe. “What can he do? He knows we can finish him if he talks too much.”

Discretion and veiled threats help this trade grow. Another man, Abdelghalib, works as an assistant surgeon in a medical centre in Beirut. He doesn’t want his real name to be revealed for security reasons. One night he saw something he wasn’t supposed to see. “A surgical act was carried out after working hours,” he tells TRT World. “The patient was not on the schedule, and I was told to leave as soon as he came in. I saw him and he looked sad, like he was being forced to do this. I saw him the very next day leaving the clinic, which isn’t normal because usually patients stay for four days, at least when there’s internal bleeding or infections. I asked the doctors how the surgery went and they told me ‘It was easy, it was just a kidney surgery’.”

Abdelghalib had never seen these doctors before. “They don’t even work in the medical centre,” he says.

He chose to remain silent because he was warned “if you speak, these will be your last words.”

However, he wished to send the following message to the Syrian community, ”I want to create awareness among poor Syrian people who are selling their organs, their kidneys to unethical people who are only interested in business. I want to tell them that it’s unhealthy and dangerous for them. Don’t sell your organs for money.”

But that message came too late, at least for some, like Abu Ahmad. The father will forever suffer serious health consequences and has no idea whether he will see his sons grow up. He turns to his older one and says, “I might disappear one day, I might die. If this is the case you will be the man of the family and you will have to take care of your mum and your little brother.”