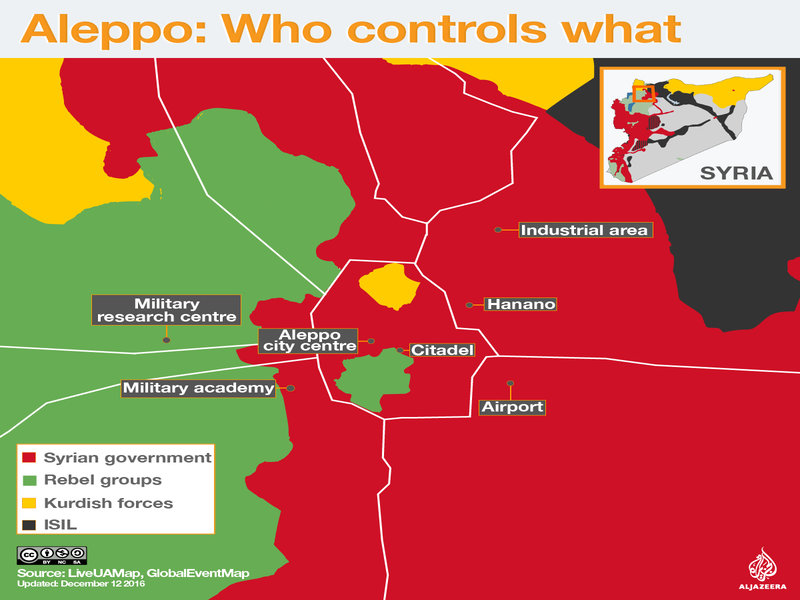 Free Syrian Army sources confirmed to Al Jazeera that Sheikh Saeed, in the eastern corner of the shrinking area rebels control, had fallen on Monday – just a day after an other neighbourhood, al-Madi, was also captured by government forces.

“The concern rebels have now is that we are seeing some kind of a domino effect, more neighbourhoods may be following as days go by,” Al Jazeera’s Imtiaz Tyab reported from Gaziantep on the Turkish border.

Rebels now control an estimated 10 square kilometres of the city, where tens of thousands of civilians and fighters are holed up.

The opposition in Aleppo has now lost 90 percent of the area they once held in the city, the UK-based Syrian Observatory for Human Rights said.

Meanwhile, Russia’s defence ministry said on Monday that 728 Syrian rebels laid down their weapons over the past 24 hours and relocated to western Aleppo.

Earlier, the Russian deputy foreign minister refuted claims that they reached an agreement with the US on safe exit for Aleppo fighters, after rebel officials claimed a proposal had been presented by the two countries.

“The issue of withdrawing militants is the subject of separate agreements. This agreement has not yet been reached, largely because the United States insists on unacceptable terms,” Sergei Ryabkov was quoted as saying by the RIA news agency on Sunday.

Ryabkov said talks between Russian and US experts would continue in Geneva, RIA reported.

Rebel officials told Reuters earlier on Sunday that a proposal had been put forth for fighters to leave the embattled city with their families and other civilians.

Russia and the US have been meeting in Geneva to seek a solution to the fighting and the humanitarian crisis it has caused.

The Russia-backed ground offensive, which began on November 26, followed an intensive aerial bombing campaign that knocked out most of the medical facilities, targeted civil defence and municipal vehicles and blocked roads with rubble.

The eastern Aleppo area has also been cut off from outside assistance since July by a government siege.

Fighters captured the eastern half of Aleppo, Syria’s largest city and former commercial capital, in 2012.
The government’s recapture of the city would mark its greatest victory since the war began in 2011.