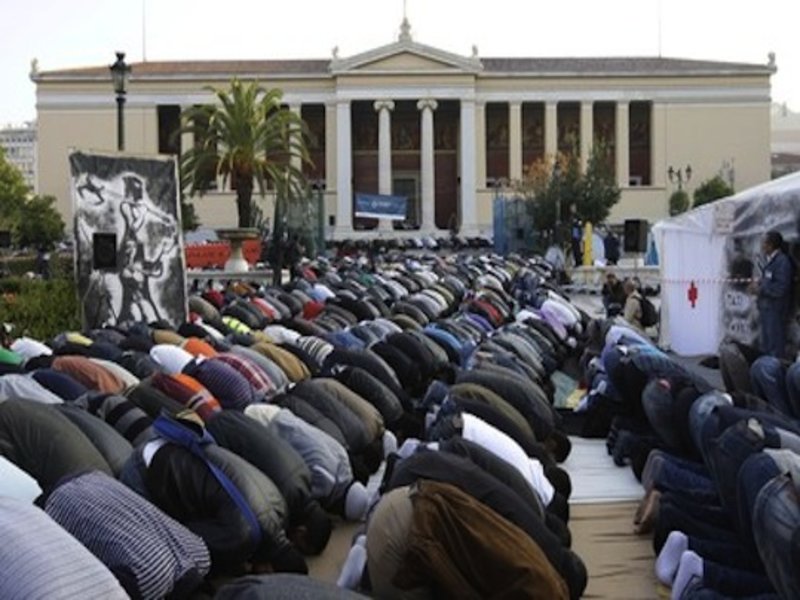 Sitting in a cafeteria in her middle-class neighbourhood of Ilioupoli, 43-year-old Anna Stamou says she soon hopes to be praying with her family at the new Athens mosque.

“I’ll perform a duaa [prayer] for children caught in war – to make all the wars to stop,” says Stamou, a mother-of-two and a PR consultant based in the Greek capital, Athens. “That’s what I pray for daily, but in the mosque, prayers are supposed to multiply,” adds Stamou, who converted to Islam a few years ago.

After years of praying in old warehouses and basements, Athens’ Muslims hope that despite protests by the far-right, the government will stick to its plan to build a mosque. Athens is the last remaining European capital without one.
Greece was under Ottoman rule for nearly four centuries until the early 1800s. If built, the mosque will be the first state-funded one since then.

It is expected to accommodate more than 350 worshipers and will be built in place of a 600 square metre former navy warehouse in the Votanikos neighbourhood of western Athens.

The complex will also feature a fountain for people to follow the ritual cleansing before praying.
“It’s not going to be anything special,” says Naim Elghandour, 62, president of the Muslim Association of Greece and Stamou’s husband.

“But it is important because it’s going to be the first official mosque with an official imam. Until now, the imams have been volunteers and that was dangerous, but we have been lucky and nothing bad happened in Greece to upset the relationships between Christians and Muslims.”

Many non-Muslim Athenians agree that a mosque must be built.

“We’re a democracy and there has to be freedom of religion,” says Aggeliki Anagnostopoulou, 62, a retiree living near the site of the upcoming mosque. “Why should I be worried, anyway? Being a Muslim doesn’t mean you’re an extremist.”

According to the Muslim Association of Greece, there are more than 100 unofficial mosques scattered throughout Athens for the estimated 200,000 Muslims living in the capital, most though are housed in basements or warehouses.

‘It’s been 10 years of waiting’
A law was passed in 2006 permitting the building of the new mosque. But this was challenged by those who oppose it. Now, after a decade of negotiations, Stamou and Elghandour are hopeful that it will finally be implemented and their religious freedoms will be recognised.

Earlier this year, the government awarded a contract to a consortium of construction companies to build the mosque at a cost of a million euros ($1.05m). It is expected to be completed in the next six months.

Construction was delayed after a far-right group occupied the warehouse for five-months with the aim of creating a Greek-only homeless shelter and blocking the building of the mosque. The sit-in ended after they were arrested by police in early November.

The setback was nothing new for the Muslim community of Athens: Far-right groups have attacked dozens of makeshift mosques in Athens over the past five years, including one incident in which suspects locked dozens of worshipers inside a prayer hall and set it on fire.

Meanwhile, Golden Dawn, a far-right party with seats in parliament, held a protest at the site of the future Athens mosque, nearly three kilometres from the world heritage site of the Acropolis.

“It’s a part of a wider policy to undermine our nation,” Nikos Michaloliakos, the leader of the party, told a crowd of a few dozen Greek flag-bearers, holding banners that read in English “Stop Islam”.

“They’re not admitting that because they’re communists – they want a secular [state] … But we, the Greek nationalists, want to respond to them: This state was built from the blood of the fighters of [the] 1821 [revolution] and was founded in the name of the Holy Trinity. This is a Greek Orthodox state.”

Those who oppose the mosque have found some support in the Greek Orthodox Church.

“In my opinion, it could be postponed until it’s clarified on whether [Muslim refugees] have the right to stay in Greece,” Archbishop Ieronymos, the head of the Greek Orthodox Church, said in an interview on Greek Skai TV, without mentioning Greek Muslims and others living in the country. “But if they are just passers-by, why do we need it?”

Archbishop Ieronymos sees the arrival of Muslim refugees in Europe as part of a plan to Islamise the continent. “This is part of a plan. A well-organised plan that is executed precisely,” he said.

But for the Stamou-Elghandour family and thousands of other Greek Muslims, the mosque is for everyone, whether or not they are Greek.

“Despite that we thought he was a man of God, the Archbishop has chosen the path of the far-right,” Elghandour says. “Wasn’t the baby Jesus a refugee that his mother whisked away in order to save him, and wasn’t he an immigrant later?”

Stamou and Elghandour say they try to raise their children without making them feel that they are part of a minority in their homeland. Their children join mass during school hours, along with other pupils, even though they aren’t obliged to.

When they do, they feel the difference between being Greek Orthodox and a Greek Muslim: They return home asking why can’t they have a beautiful place to pray in, like the church in their neighbourhood, the couple say.
“We [the adults] are used to praying in the basements for our daily prayers, but I see the second and third generations aren’t happy,” Elghandour says.

He often takes his family abroad during the Muslim holidays to “pray in dignity”. “The state considers us second-class citizens. Why should my children feel like that?”

Stamou also worries about how the renovated warehouse will turn out and what the new mosque will look like.
“It’s important that it’s nicely renovated in order for the young children to feel they are equal citizens,” Stamou says. “They get restless in the basements. And even though we don’t force them to pray, they don’t always want to come to the basement to pray. But when we’re abroad, they don’t want to leave the mosque – they play there, they’re happy, they admire the [architecture].”

Now, their children keep asking when the Athens mosque will be ready. The family looks forward to celebrating the next Ramadan [the month during which Muslims fast] for the first time in a real mosque in their hometown. “Maybe we’ll even have the iftar [the breaking of the fast] dinner there,” they say.

Elghandour says he tells them: “Wait. It’s not ready yet.”

“If a mosque is finally built, we’ll be happy, but our excitement is gone,” Stamou says. “It’s been 10 years of waiting and 10 years of cheap and petty politics.”