Police followed me around Cordoba’s mosque. All I did was wear a hijab#Islamophobia 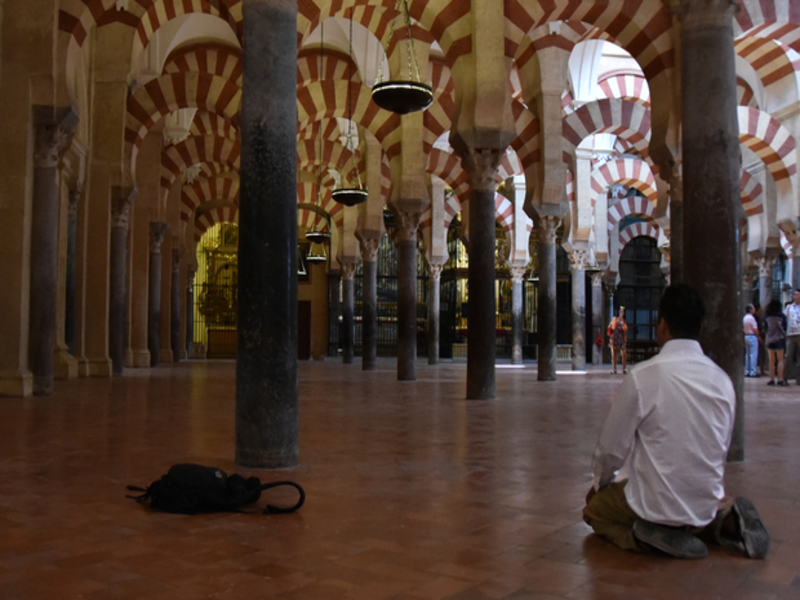 This photograph was recently taken in Cordoba’s Mosque-Cathedral, a place whose naming has been, and remains, contested and political.

Like all of the other tourists inside this “mosque-cathedral”, I walked around the building and enjoyed the architecture. Yet, unlike them, I did that with policemen following and watching me. They would look at me and speak into their walkie talkies.

I had not expected that I would find at least six, maybe seven, policemen in full uniform, one of whom stood sternly with his machine gun.

I would look at them and then look back to the intricate walls of the monument, built in 785 on the site of Visigoth remains and later became one of Andalusia’s most influential hubs before it was turned into a church in the 13th century.

While I had been bothered by the way their suspicious eyes were glued to me, as though my mere presence inside this building was threatening, I told myself that it was okay. This was not the first time I had been assumed to be suspicious because of the way I look.

At one point during my visit, a Muslim-American man and a Muslim-Mexican man, who had also been visiting the site, asked me to take a photo of them posing in a position of prayer. Muslim prayer inside this building is prohibited, despite the fact that it has historically been a site of worship for both Muslims and Christians.

The police and guards quickly reacted to the scene, and although we had not known about these rules, an argument broke out. One of the policemen insisted that I spoke Spanish and was lying about it, even after I repeatedly told him that I did not understand most of what he was saying.

Soon enough, the Muslim-American man left without trouble (his “Muslim-ness” was not visible), and I had decided to continue walking around inside the building, despite the policemen’s ever more watchful eyes. I told myself again that it was okay, because I thought that that would be the extent of it.

Questions all around
It was not. I had not expected that in the courtyard of the monument next at the exit, I would find at least six, maybe seven, policemen in full uniform, one of whom stood sternly with his machine gun. They were staring, waiting, and I was scared by the intimidating sight. A policewoman was with them, and she quickly began inspecting me and my bag.

Jalil, the Mexican man, had thankfully also walked out with me, and while he was getting scrutinised as well, he translated. I took out my useless, Egyptian, “third-world” passport, a passport that only managed to get me 10 days in Europe.

Despite being one of the more privileged “third-world” citizens who can speak English, study a Western curriculum at school, and manage to get a visa, I was still one of the “undesirables” to this continent.

What was I doing in Spain, they asked, as they wrote down all my information, my name, my nationality, and my passport number.

But I had questions too: how much of this exaggerated (and quite abusive) response was fuelled by the fact that I just so happen to fit into the categories of brown, Muslim and woman? If praying had been against the rules, well technically, I was not praying. If I did present a threat to the security of this space by my mere presence there, wasn’t it enough to have just one policewoman and one policeman waiting outside?

Some Spanish friends have explained to me that the police’s reactions were heightened by the terrorist attacks that had been sporadically taking place around Europe. They also reasoned that the controversy over the site is an important factor and provided context to the incident.

I contacted a tourism office in Cordoba which organises visits and sells tickets to the site to see what they had to say about what happened to me, but have not heard back at the time of this column’s publication.

I have thought about the humiliation of this experience a lot since it happened. It was in many ways, very telling about the banal forms of gendered and racialised violence that many experience on a daily basis, as well as about the inequality surrounding the movement of people around the world.

While the Muslim-American man managed to leave the building without being harassed or inspected further by the police, my “Muslim-ness” was easier to spot, given that I wear a headscarf. My difference was visible.

Muslim women experience discrimination differently from Muslim men, and are thus usually the ones to face the brunt of the violence that accompanies it. As many have argued before me, Islamophobia is a particularly gendered form of discrimination.

From this point, it is important also to reflect on the arguments made by Muslims who struggle with Islamophobia in the so-called Western world. Much of the time, they seem compelled, in the face of discrimination, to highlight and reassert their “American-ness,” or their “British-ness” or whichever other Western nationality they hold.

The point is valid, especially with slurs like “go home”. How can they be asked to go home when this is their home? Yet, what if this wasn’t their home? Is it such a crime to be in Europe as a non-European? Why must I be made to go through hell in order to obtain a visa, when all any European national has to do come to my country is buy a plane ticket?

If I successfully get to Europe, I will be policed further. My movement will be controlled. I must reassert over and over that I will not overstay my visa, that I will go “home” and that I am not a “threat”.

Yet I am one of the “lucky” ones, spared the harsh conditions that compel women (and men) to precariously take to the sea because their visa will inevitably be rejected, only to be otheredupon arrival.