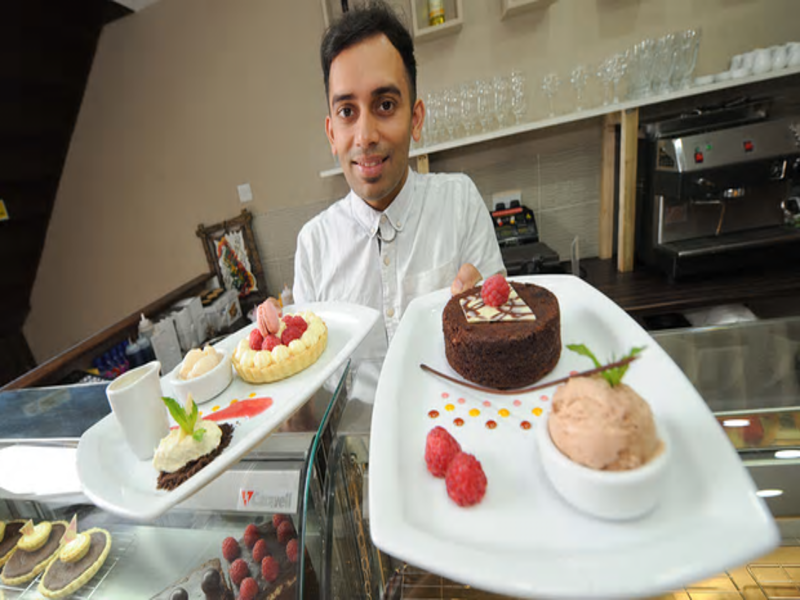 From mint mojitos in Birmingham to scented oils in London, Generation M’s entrepreneurs are catering for an affluent group ignored by the big brands

The Artisan dessert restaurant in Birmingham, is crowded. People squash up on its green and pink velvet banquettes to drink mint mojitos or raspberry spice mocktails and sample an array of elaborate cakes and puddings.

Opened last year by Ali Imdad, a Great British Bake Off contestant in 2013, and his business partner Vakas Mohammed, Artisan has become a sought-out destination for couples and friends to meet after dinner. “A lot of Muslims won’t go to a bar or a club, but going out for mocktails and dessert is a good alternative,” said Imdad.

The growth of dessert parlours was a reflection of the rising disposable income of young Muslims, he said. “People want to spend money on high-quality products and experiences.”

Later this month, Imdad will take part in the Muslim Lifestyle Expo, which will showcase businesses aimed at this burgeoning consumer market. Worldwide, the sector is forecast to be worth more than £2 trillion by the end of this decade, according to the State of the Global Islamic Economy report, and is growing at nearly double the rate of the global economy generally.

More than 100 businesses from 15 countries will set up their stalls at Manchester’s Event City on 29 and 30 October. Exhibitors will include producers and suppliers of halal food brands, toiletries and cosmetics; modest fashion; travel; Islamic finance; entertainment; and greeting cards and toys.

Fashion shows, cookery demonstrations and and shows from standup comedians will alternate with seminars on empowering women entrepreneurs, motivational business speakers and workshops on Islamic art. Ten thousand visitors are expected to stump up the £10 entrance fee.

“It’s a huge untapped market. We’re just skimming the surface,” said Tahir Mirza, the expo’s founder. In 2010, the global Muslim population was 1.6 billion people. By 2050 it is expected to reach 2.8 billion, a quarter of the world’s population. One third of Muslims are under 15; two-thirds are under 30.

The size of the Muslim middle class is forecast to triple by 2030. The economies and populations of countries with Muslim majorities are growing fast and Muslim minorities in Britain, Europe and North America are young, affluent and thriving. Young Muslims are the fastest growing demographic group in the UK.