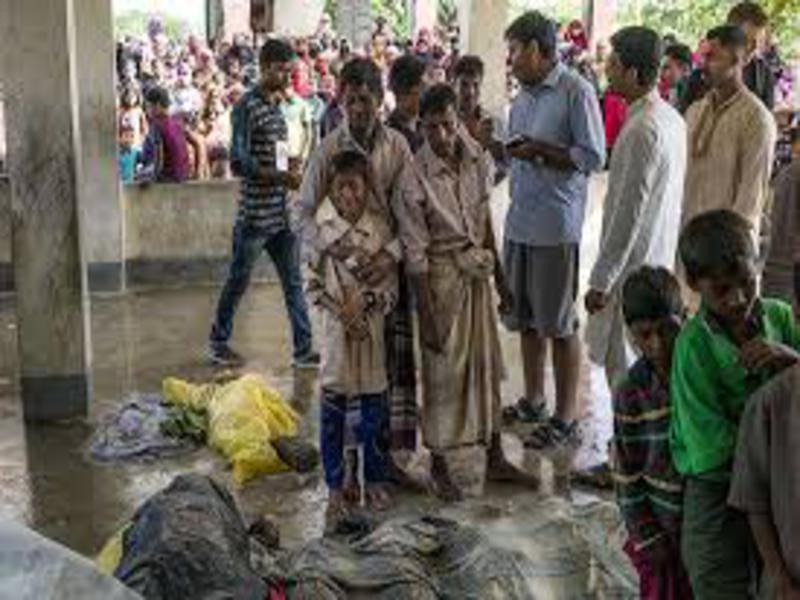 One million Rohingya survivors of the Myanmar genocide, who took refuge across the borders in neighboring Bangladesh, remain largely unpersuaded by the news of the latest repatriation deal the United Nations agencies have signed with their perpetrators in Naypyidaw, and openly call for “UN Security Forces” to guarantee safe return to their homelands in the Western Myanmar state of Rakhine.

On 6 June, the two UN agencies with mandates for refugee protection and “development” inked the Memorandum of Understanding (MOU) with the Government of Myanmar, a hybrid military-Aung-San-Suu-Kyi regime. Knut Osby, UN’s man in Yangon, took to the Twittersphere, putting the spin that “Secretary-General Antonio Guterres welcomes the agreement”, whose content is treated as if it were Myanmar’s top national security secret. Additionally, Mr Osby, who holds the assistant secretary general position, tried to assure the Rohingya refugees via the mass media that UN would be pressing for “group identity” recognition by Myanmar and a “voluntary, safe, dignified and sustainable” return.

Leading INGOs, including the Nobel Peace Prize-winning Physicians for Human Rights (PHR) and the Washington-based Refugees International, headed by Eric Schwartz, the former U.S. Assistant Secretary of State for Refugees and Migration, issued statements, stressing the total absence of necessary conditions and injecting a dose of reality as if to pre-empt the typically phony reactions of ‘welcome’ that pervade diplomatic quarters. Both organizations express varying degrees of valid scepticism about the MOU.

The conditions on the ground indicate no semblance of physical safety for any returning Rohingyas.

There is no indication that the official acceptance of Rohingya by Myanmar as an integral ethnic minority of the Union is forthcoming, especially when one remembers the national standing Rohingyas had enjoyed as a group until the early years of the military rule in the 1960’s. And there is little prospect for their re-integration into the predominantly Buddhist society where the most powerful Senior General Min Aung Hlaing publicly declared his genocidal intent, that the presence of the Rohingya in N. Rakhine was an “unfinished business” from the pogroms of the Second World War.

In addition to the frightening prospects of being marched back to Myanmar’s “killing fields”, what has truly unnerved the Rohingya refugees in Bangladesh — thousands have been in refugee camps in Bangladesh since the early 1990’s as they fled the earlier waves of violent persecution — about this latest UN-Myanmar refugee deal is this: UN agencies — the UNDP, the UNHCR, the World Food Program (WFP) — have a dismal record when it comes to standing up for the Rohingya in the last 40 years since the UNHCR first became involved in the repatriation process in the summer of 1978.

The UNHCR operates in both countries at the pleasure of the governments in Dhaka and Naypyidaw, neither of which is a signatory to the Refugee Conventions. The UN’s rotating international staff in Myanmar may lack the institutional memory about their uncomfortable role in the broken sacred principle of non-refoulment, but those Rohingya who were forcibly repatriated have not. The UN agency whose principal mandate is the protection of the refugees was in fact in no position to stand up for the most vulnerable Rohingyas sandwiched between the perpetrating Myanmar and Bangladesh.

In the decades that followed the 1990’s repatriations, the UN’s refugee watchdog had consistently put keeping good relations with host governments in order to secure access — or “pragmatic humanitarianism” — above its own organizational mandate of protection. That is why the UNHCR, and all other UN agencies operating in Myanmar, have had an open if unwritten, directive for all staff to comply with regarding Myanmar’s refusal to use the term ‘Rohingya’. So the staffs of all UN agencies operating in Myanmar avoid using the word ‘Rohingya’ in all their communications seen or heard by Myanmar officials. On the eve of Myanmar’s “ethnic cleansing” of the N. Rakhine state, the WFP reportedly recalled its July 2017 report about the semi-famine like conditions in which 80,000 Rohingya children under the age of 5 were living at the “request” of the Myanmar government.

Specifically, UN agencies in Myanmar lead an organizational double-life, speaking in two different scripts: one, tailored to placate the host regime by not calling Rohingyas by the group’s ethnic name in meetings and interactions with Myanmar authorities, who have attempted to systematically erase the group’s identity from Myanmar’s collective consciousness, history and official records; the other one to please the ears of global human rights organizations and Rohingya campaigners internationally by calling the group by their proper name, Rohingyas.

At the level of individual management of the UN’s in-country team, the last UN Resident Coordinator, Renata Lok-Dessallien, opted to maintain cordial relations with Myanmar leaders and prioritizing (business-friendly) development approach over human rights, an act which undermined the then UN Secretary General Ban Ki-moon’s policy of Human-Rights-First, which was adopted as a result of the widespread failures of UN agencies during the last phase of the civil war in Sri Lanka, where Colombo was accused of war crimes, crimes against humanity and even genocide against a Hindu Tamil minority group. Specifically, Lok-Dessallien commissioned an internal report entitled “The Role of the United Nations in Rakhine state” but subsequently “suppressed” the report.

The report’s recommendations included the call for frontloading human rights with respect to the oppressed Rohingya group, pointing out the UN’s ill-preparedness in the face of (likely) mass atrocities against the group and enjoining taking a firmer stance on the state’s egregious rights abuses in the Rohingya area.

The UN had since replaced the disgraced Resident Coordinator with Knut Osby, significantly increased its Myanmar budget and elevated its office in Myanmar one-notch up the UN bureaucracy to the level of Assistant Secretary General-ship.

The UN’s reputation — and most specifically the reputation of the UNHCR and the UNDP — is on the line in Myanmar, and beyond. Any part they play in facilitating returns from Bangladesh to Myanmar is risky when returns could potentially result in another round of mass killings, further decades of containment in concentration camps or deliberate slow starvation. The UN agencies simply must place protection and human rights first this time around.

The signs of a new secretive deal do not bode well for the Rohingya survivors. The newly-organized UN in Myanmar has even shelved the organization’s own governing principles of transparency and inclusivity, as evidenced by the freshly-inked MOU with Myanmar. Myanmar is now a suspect in the eyes of the International Criminal Court and international law circles. In apparent compliance with the demands for secrecy typically made by Myanmar’s military-controlled National League for Democracy (NLD) government, the UN has not made public the MOU for scrutiny. Neither has the UN included Rohingyas in any stage of the negotiations over the MOU nor spelt out their future role. There is then little wonder that the Free Rohingya Coalition, the emerging global network of the widely recognized Rohingya representatives, with deep roots in their communities, both inside Myanmar and in the diaspora, including Bangladesh, cry foul against the MOU, which remains shady.

The UNHCR has added a fourth adjective — “sustainable” — to the mainstreamed mantra of “voluntary, safe and dignified”. To make the fourth adjective viable, the UN must listen to Rohingya voices that call for a “protected return to a protected homeland in Myanmar”.