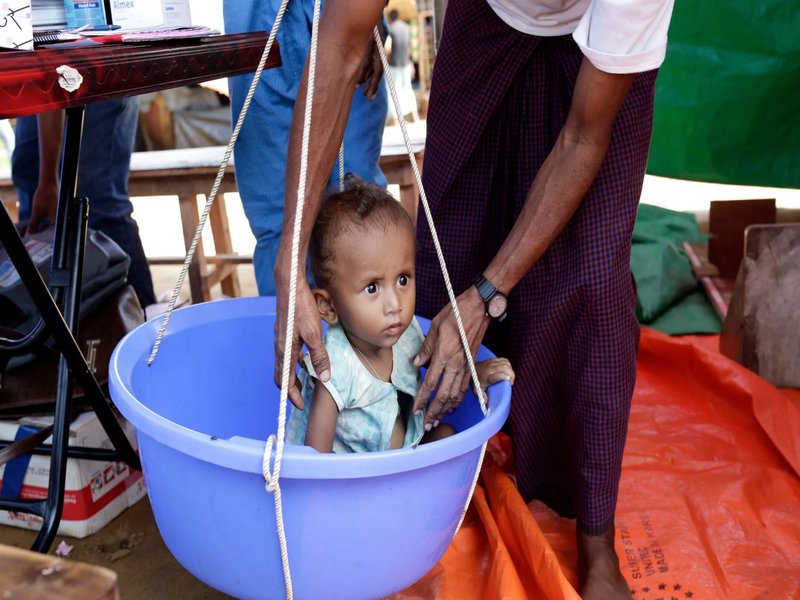 The Burmese army is now using starvation as a new cruel tactic to drive the remaining communities of the Muslim Rohingya minority out of Burma, British Rohingya activists have claimed.

Military and government restrictions on aid had created a food crisis that made it impossible for the quarter of a million Rohingya left in Burma’s Rakhine state to stay, said Tun Khin, President of the Burmese Rohingya Association UK.

“Rohingya are now being starved out of Burma and unless real pressure is put on the government and military to lift aid and movement restrictions, most…will be forced out within weeks,” he said.

About 519,000 refugees have crossed into Bangladesh since August 25, when attacks by Rohingya militants on security posts in Rakhine state sparked a ferocious military crackdown.

A fresh surge of refugees driven by fears of starvation and violence fled to Bangladesh on Monday. But many others have been stranded on Burma’s Maungdaw beach, without food or shelter and unable to pay traffickers to take them across the River Naf to safety.

The majority are from Buthidaung district. Mr Tun, who has just returned from Bangladesh, told the Telegraph they had fled in desperation because the military had prevented them from accessing food and protected “Rakhine extremists” who robbed them of everything they had.

“One person told me ‘the military are restricting us from moving from one place to the other. I have no food. My wife is pregnant and I have nothing to provide her… so if I stay here another two or three days the baby will die’,” he said.

Mr Tun’s claims were supported by a graphic UN report released on Wednesday that detailed the brutal Burmese effort to drive Muslim Rohingyas out by torching their homes, crops and villages to prevent them from returning.

The report said “credible information” revealed that the security forces had purposely razed property, fields, food-stocks, livestock and even trees.

“If villages have been completely destroyed and livelihood possibilities have been destroyed, what we fear is that they may be incarcerated or detained in camps,” Jyoti Sanghera, head of the Asia and Pacific region of the UN human rights office, said.

In a report based on 65 interviews with refugees who had recently arrived in Bangladesh, the UN said that “clearance operations” had begun even before insurgents attacked police posts in August, citing deliberate restrictions on food, limited access to medical care, and arbitrary arrests.

In some of the most shocking revelations, UN investigators detailed reports of child torture and rape, and the case of a pregnant woman whose unborn child had been cut out of her womb.

One 12 year old girl described how her little sister had been shot by security forces who surrounded their home.

“They shot my sister in front of me, she was only seven years old. She cried and told me to run. I tried to protect her… but we had no medical assistance on the hillside and she was bleeding so much that after one day she died. I buried her myself,” she said.

The UK-based Burma Human Rights Network has called for immediate and unrestricted access for aid agencies in Rakhine.

British International Development Secretary Priti Patel pledged on Thursday to double the next £ 2m of public donations to the Disasters Emergency Committee appeal for people fleeing Burma. £ 9m has been raised so far, of which £ 3m has been aid matched by the government.

Donations were “saving lives,” she said. “Malnourished children on the brink of death will now be able to eat, families who have been forced to live out in the open after their villages were burned will get shelter and much needed clean water.”

Meanwhile on Wednesday, the Burmese authorities bowed to international pressure and allowed some food aid to reach 600 families in the village of Ah Nauk Pyin, for the first time in three months.

Minister of Relief and Resettlement Win Myat Aye said the government would support all vulnerable people.

“We’ll support these people continuously, until they can stand on their own feet,” he said. “Nobody wants to rely on aid all their lives.”