The day began with an early start, full of anticipation for our first visit to the Syria/Turkey border town of Reyhanli. We set out to the Reyhanli training and distribution centre where we were met by the head of the Syria Relief organisation here in Turkey, brother Muazzim. We were taken into the centre to be greeted by a saddening sight; Syrian refugees, all with various disabilities, many are amputees. Some double, some single, most in wheelchairs. Most frighteningly, some of these people will remain in these chairs for the rest of their lives, paralyzed forever.

The centre provides treatment for these refugees, to rehabilitate them and provide them with some means of managing their disabilities. CII Projects was able to assist by providing financial assistance to the refugees. 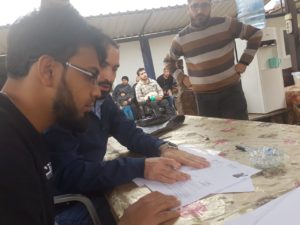 A total of $10 000 was distributed to 200 refugees, $50 each upon presenting their refugee cards and signing for the receipt of the moneys. Such is the need of the people that most will use it for further treatment. The need of the people is dire, but their joy and their prayers are for the people of South Africa, as their assistance is genuine and heartfelt. 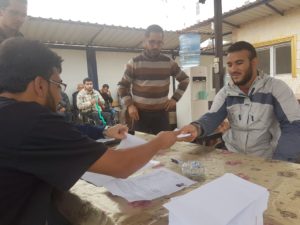 The Cii projects team handing out the $50 to disable refugees

During our time we met with and spoke to many people, the stories of 3 whom I’d like to share

We met a young boy who was mentally and physically handicapped. Unable to talk, we spoke with his father. A father of 5 with 2 sons and 3 daughters. Allah Ta’alah has tested this man with disabilities for both his sons. Whilst the elder son had passed away, the younger, whom we had the pleasure of meeting, was born with a disability and has been paralyzed since birth. 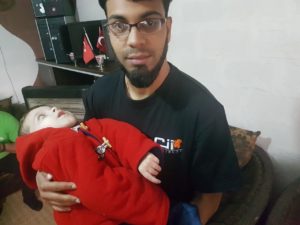 Mentally and physically disabled child with no eyesight

Unable to speak or understand much, the doctors are only able to make him comfortable as there is not much hope of recovery. His pride in his 3 daughters is heartwarming. They have assisted him and stood by him through all the difficulties, trying to make a living in this new home away from home. Watching this father holding his 7 year old son in his hands and telling his tale brought tears to our eyes. 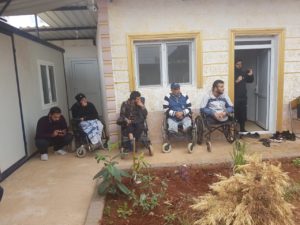 Disabled refugees waiting in the line

We met a fellow journalist from Ghouta, Brother Waleed, who told us a harrowing story. Whilst covering a story, Waleed was informed of a rocket launched towards their location. Whilst we are not strangers to crime and violence in South Africa, the thought of facing a rocket sounds surreal. The crowd began to scatter, people running in all directions trying to get to safety. Brother Waleed was trying to get away, the rocket landed in front of him and exploded. The explosion left him without the use of his legs and massive injuries. With treatment over the past few months, he has made a good recovery but will have to make use of crutches for the rest of his life.

With all this difficulty and pain, his thoughts are more for his family still in Syria. Alhamdulillah, he says that they are safe and trying to arrange the journey to Reyhanli. He is eagerly awaiting the day he will be reunited with them.

Next we met a very intelligent brother named Dara’aa from Syria, who was caught in a bomb blast in Eastern Ghouta. The blast caused severe trauma to his back and legs, leaving him paralysed from the waist down. In order to ensure that his legs don’t slip off the chair as he moves ar

ound, his legs have to be tied to the chair. This is necessary since he is unable to lift his legs back onto the chair which supports himself. His injuries were initially much worse, unable to move his arms. With rehabilitation and the dedication of the doctors he has managed to regain the use of his hands, but the work continuously requires dedication and a strong will. Brother Dara’aa has not let his disabilities slow him down and he has taken up studies in accounting here at the training and development centre. His goal is to complete his studies and get a job to allow him to support his family who have joined him in Reyhanli. His determination and iron strong will, allowing him to overcome his challenges and focus on his goals is inspirational and an example to the youth of today. 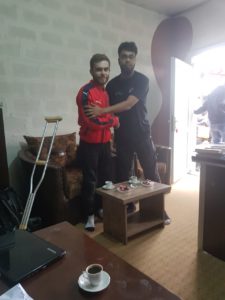 We were taken for a tour of the classrooms in the centre where we were provided with a chance to interact with some of the students and teachers. We met with a group of students sewing and making garments to sell as a living. There skill and professionalism is amazing, even more so when you consider that these students are working with disabilities that many of us would consider completely debilitating. 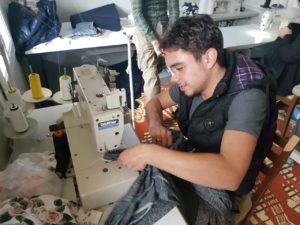 Refugees learning to sew and make garments to sell

Another classroom held about 20 youngsters, 13-14 years old, studying Electrical Engineering with the goal of completing their education in order to find a job and contribute to society, rather than become a burden upon it. 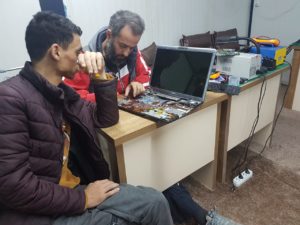 Similarly other classrooms were busy with classes teaching accounting and computer engineering, providing these young people with skills that they can use despite their disabilities. Sitting in on these classes, we too were able to learn a thing or two about income statement and motherboards, much to the joy of our fellow students. 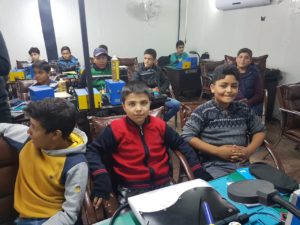 Today was a day filled with lessons. Lessons in humility, in determination, in the power of the human spirit, in faith and not losing hope in the mercy of Allah.

Whoever is reading this, if there is one thing I can share with you from my experiences today, it would be for the youth to work hard and make the most of the opportunities that they are given. If the youth of Syria can overcome war and conflict, and work through disabilities to pursue an education and support their families, then what excuse can we give for not giving our best and achieving greatness when our challenges seem so small in comparison.
For more information go to:

To Donate generously towards the families survival supplies.

Cii Projects, together we make the difference!

Previous article Guy Fawkes: To celebrate or not to celebrate?