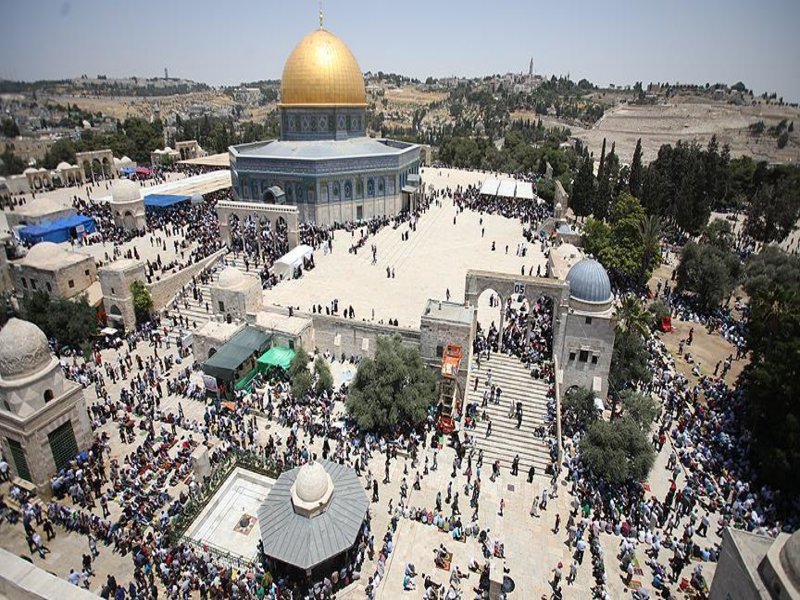 It should hardly take much convincing to get one packing for a voyage to al-Quds. The first qiblah, second mosque to be established and third holiest site in Islam is a haven of history and a sanctuary replete with spiritual blessings.

For starters, Masjid al-Aqsa is one of the select trio of masaajid one is permitted to head off towards solely for the purpose of prayer, as per the Ahadeeth of the Prophet Muhammad (SAW).

Sayyidina Abu Hurairah (RA) narrates: “The Messenger of Allah (SAW) said: ‘Do not deliberately set out on a journey [for the purpose of worship] but to three mosques: the Masjid al Haram [in Makkah], al Masjid al Aqsa[in Jerusalem], and my Masjid[in Madinah]’”(Bukhari)

The rewards of worship here are multiplied manifold – up to 5000 times, according to some narrations. Its association with the Prophets, Sahabah and saintly persons throughout history, too, is unmistakeable.

Al-Aqsa marks the only spot on earth where all the Prophets performed Salaah together, at the same time, in congregation. It was here that the epithet of the Messenger of Allah (SAW), of Imaamul Ambiyaa (Leader of the Prophets), was manifested. Such is its pedigree that the companion Sayyidina Ibn Abbas (RA) commented: “There is not a single inch in al-Quds where a Prophet has not prayed or an angel not stood” (Tirmidhi and Imam Ahmad).

In a Hadith, the Prophet (SAW) narrates how, among the three supplications the Prophet Sulaymaan (AS) made whilst reconstructing al-Aqsa, was a duaa for the person who came to Masjid al-Aqsa solely for the purpose of praying therein to be delivered from all his sins as the day his mother gave birth to him.

Adding weight to this duaa, the Prophet (SAW) remarked, “the [first] two prayers were granted, and I hope the third was granted as well.”

Hence – though obviously not equivalent in status – the spiritual journey to Masjid al Aqsa can be considered to share one of the rewards that in fact has been narrated for the pillar of Hajj.

As indicated earlier, such spiritual incentives should be compelling enough to stir one to undertake the journey, as ibadah anyway should constitute the primary motivation for visiting the Masjid.

However, as enlightened global citizens, we are not ambivalent to the current suffering of Masjid al-Aqsa and its people, and, as such, this pitiful status quo can only provide us an additional impetus for the trip.

It is noteworthy that, unlike his directives regarding the other most esteemed mosques, the Messenger of Allah (SAW) singled out Masjid al-Aqsa as a financial responsibility for the wider Ummah, when he issued guidelines to those who cannot manage to undertake the physical journey there. “Send oil for its lamps,” he said, “for whoever does so, it is as if they went there.”

The plight of Masjid al Aqsa today can be captured in two concurrent trends: A drive towards exclusion, and another of inclusion.

For the former, this is manifested through the perennial restrictions Israel places on Palestinian entry into al-Aqsa, from policing the age groups, genders, residency status and geographical regions of origin of entrants.

This is aided by an architecture of exclusion in place around Jerusalem and the Masjid itself comprising the Apartheid Wall, expanding Jewish settlements, house demolitions, banning orders, different tiers of permits, surveillance, brute force and bureaucracy.

The metal detectors Israel sought to impose on the Masjid in July were meant to entrench this exclusion, and although thwarted by a spirited popular resistance, Israel has not relented in its pursuits, of late setting up a dedicated police unit to assert control at Aqsa and installing new cameras overlooking its entrances.

These latest moves, said Sheikh Omar al Kiswani, Imam of the Masjid, were intended to tighten the supervision of worshippers and to send them a message that they were being watched from the moment they entered the site.

On the flip side, the inclusionary trend can best be captured in the meteoric rise of the Temple Movement in Israel and its constant stream of visits and provocations regarding the mosque.

In the past, when settlers sought to visit Masjid al-Aqsa, restrictions on group size and other criteria were enforced.

Before 2000, mentions the Ir Amim report, Dangerous Liaison – Dynamics of the Temple Movements, Jewish visitors entered al-Aqsa in pairs or groups of three and until the first group left, the next was not permitted to enter. Today those restrictions no longer apply.

Soldiers freely visit in uniform, religious rituals are performed discreetly, and “ascending the Mount” – as the Temple Movement dubs it – in large groups, is a near daily affair. Whilst previously discouraged by senior rabbinical authorities – borne from a religious fear of “treading on the Holy of Holies,” visitation is now sanctioned by an increasing lot of rabbinic figures in the national-religious community, who have argued that the prohibited areas can simply be avoided during walkabouts.

2015 Israeli Police statistics showed that Jewish visitation to al-Aqsa increased some 92 percent since 2009. A record number of Jews visited over Passover this year, and that record was quickly surpassed in August when 1043 Jews visited the holy site from 7:30-11 a.m. in a single day.

Temple zealots wax lyrical about these advances, often citing them as harbingers for the physical establishment of the Temple.

When considered carefully, a picture emerges wherein these drives of exclusion and inclusion merge, resulting only in an increased sense of vulnerability and isolation for Masjid al Aqsa and her people.

At present, a rapid rail link between Tel-Aviv and Jerusalem is in its advanced stages; a controversial cable car project that will further assert Israeli sovereignty on Jerusalem has been approved, and the settler-run City of David complex, close to Al-Aqsa, has taken over a large area of Silwan, damaged surrounding Palestinian homes with underground excavations, and encouraged large numbers of settlers to move into the area, backed by armed guards.

For many observers, these ongoing schemes point to an all-out effort to change the historically diverse character of Jerusalem irreversibly.

“The fight for Jerusalem has begun in earnest,” a spokesperson for a new right-wing Zionist think-tank operating from the Holy City said recently, “and we have to be there.”

In light of these shifting sands, it is imperative that those who are troubled by the plight of the Palestinians and the siege of Masjid al-Aqsa are there too, to assert a physical presence and become observers, so as to impede plans to create new facts on the ground, and ensure that full-blown domination of al-Quds does not become fait accompli.

During a visit to the holy compound in Ramadan, I witnessed first-hand the travails and deep yearning of Palestinians simply to reach the Masjid. For some elderly persons from the West Bank, this was the first time ever they got to pray there. Many intuitively fell into prostration immediately on entering the Holy Sanctuary. Others could be seen making emotional phone-calls to family members indicating that they “finally made it,” whilst yet others, totally overwhelmed, even fainted.

What was deeply humbling (and troubling) about the experience was, as a 30-year-old from faraway South Africa, I was been asked questions about the Masjid and being requested to give directions to sites in its compound by individuals double my age – indigenous Palestinians, who lived at its doorstep, but were largely barred from visiting due to the architecture of exclusion that the occupier had effected, to the extent that Masjid had grown unfamiliar to them.

Masjid al-Aqsa and Jerusalem occupies a central role in the identity of all Palestinians, with phrases such as ‘Next Year in al-Quds’ or ‘Next Year in Al-Aqsa’ being popular slogans shared at happy occasions and religious celebrations. However, personal interactions with Palestinians from the West Bank, Gaza and the diaspora reveal just how far Occupation has impeded them from perceiving al-Aqsa as a tangible reality.

The same could be said to be the case with a vast majority of residents of the Arab World, who due to (perfectly acceptable) efforts to prevent normalization with the occupier, cannot imagine visits to al-Aqsa for the foreseeable future.

This leaves alone Muslims in the West, who, due to the relative ease of travel their status permits, come to shoulder a massive responsibility towards Masjid al-Aqsa. It is in fact unfathomable, noting the mammoth struggles others endure to get to Masjid al-Aqsa, for Muslims in this category to squander this ease and the golden opportunities to visit – thereby leaving unfulfilled a spiritual calling, and betraying a weighty obligation owed to the Ummah.

Visiting Masjid al-Aqsa, as Dr Wasfi Kailani writes, serves a number of purposes. It is first: a religious duty; second: a way of cementing our connection to our holy sites and third: a way of keeping us aware of the plots to destroy and remove our holy sites from existence. Visiting Jerusalem is also a way of supporting the steadfast Jerusalemites as they withstand the harm they face at the hands of the occupation; and a way for them to know that they are not alone in the struggle to maintain the Holy City’s authentic identity.

Adds the UK’s Friends of Al-Aqsa, by visiting Jerusalem and Masjid al-Aqsa, Muslims from around the world empower the Palestinians and provide them with the support and strength to continue their struggle. This support is vital, and every visitor to Jerusalem lifts the spirits of each Palestinian they encounter. For Palestinians, the simple fact that they have not been forgotten gives them the incentive to continue in their struggle.

And it inspires the visitor to continue the struggle too.

Having bathed in al-Aqsa’s blessings, one leaves better equipped for taking on the spiritual struggles of everyday life. And having encountered the realities of dispossession in the Holy Land, one is spurred on to take up the cudgels and make our world a better and more just place for all those who live in it.

Ebrahim Moosa is a researcher at the Palestine Information Network(PIN). Follow PIN on Twitter @learnpalestine and @firstqiblah