In a Bangladeshi hospital, Rohingya are treated for wounds sustained when the Myanmar army burned down their homes.

Cox’s Bazar, Bangladesh – An infant lies in his mother’s lap, wailing in pain, his torso, face and hands burned. A woman lies listless and seemingly alone in the corner. She, too, has burns all over her body.

Such scenes of suffering have become common at Sadar Hospital in the Bangladeshi port city of Cox’s Bazar. These patients are Rohingya refugees who have fled attacks by the Myanmar military in neighbouring Myanmar’s Rakhine State.

“The army came and burned down my house. I was inside the house at that time,” says one patient, 30-year-old Shahida Begum. “With no route to escape, I was also engulfed in the fire and my whole body sustained burns.”

“The pain is unbearable,” she explains. “It was better to die than suffer like this.”

Three of Shahida’s sons were killed two days before her house in the village of Rasidong was set on fire.

“Life will never be the same again,” she says. 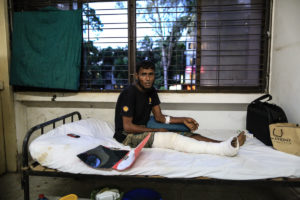 Dildar Begum and her 10-year-old daughter, Noor Kolima, were admitted to the hospital five days ago and are the only survivors from their family. Dildar lost her husband, infant son and mother-in-law to the violence.

“My family was attacked on the 29th of August. The army came and fired indiscriminately,” Dildar says.

“My daughter and I somehow survived the attack, but the two monks accompanying the army men tried to kill us with a big knife. They thought we were dead and left us. We hid in the house for three days and then escaped.”

The journey they undertook to reach the border is a blur, she says. “I was in so much pain.”

Eight-year-old Mohammad Anas slipped and injured his face as he was fleeing Myanmar. His uncle, Syed Alam, is with him at the hospital. 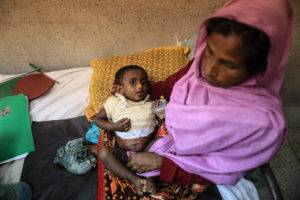 “We are from Lankhali village, Mandua district and it was attacked three days before Eid,” Syed explains. “We escaped to the nearby hillock. We were 10 family members when we fled, but only six of us managed to reach here. I have no clue about what happened to the others.”

According to the UNHCR, the UN refugee agency, an estimated 400,000 Rohingya refugees have arrived in Bangladesh since August 25 in what is being called one of the “fastest growing refugee crises of recent years”.