Mosul Dam collapse ‘will be worse than a nuclear bomb’ 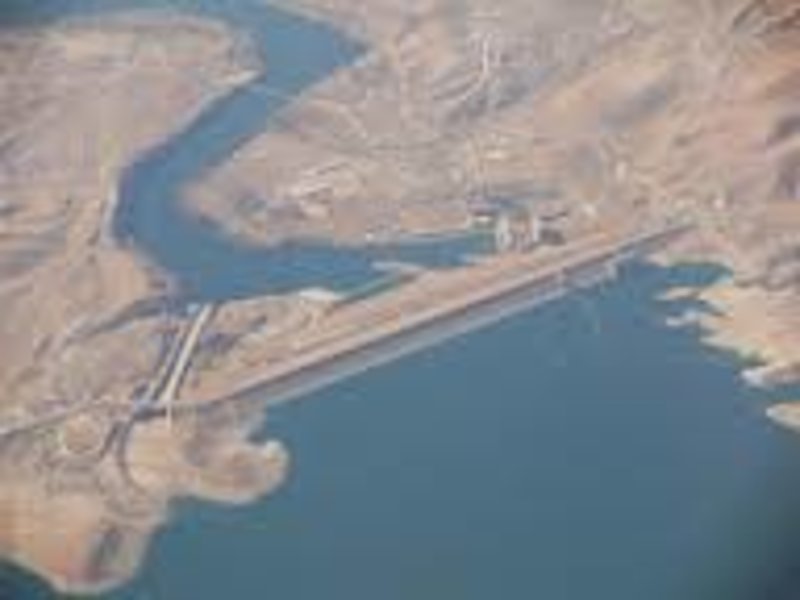 Warnings by scientists and environmentalists about an imminent collapse are dismissed by Iraqi officials as far-fetched.

As Iraqi forces continue their military operation to take Mosul from the Islamic State of Iraq and the Levant (ISIL, also known as ISIS), another equally important battle to save the Mosul Dam, located 60km north of Mosul, is under way.

After six months of frantic security and logistical preparations, an Italian company has kicked off the repair works to beef up the dam, under the protection of five hundred Italian soldiers and Kurdish Peshmerga forces.

The Italian company,TREVI, will have about 18 months to prevent the foundations of the dam from plunging deeper underground, averting an impending catastrophe. Experts warn that if the dam collapses, up to 11.11 billion cubic-metres of water known as Lake Dahuk, will submerge Mosul and create an inundation that will affect the lives of millions of people living along the banks of the Tigris river.

“I don’t know if it’s a race against time, but we have the know-how and the technology to make the dam safe for the time-being,” said a company source on the phone, on condition of anonymity for security reasons.

Under a $300m contract, funded by the World Bank, the Italian company is doing maintenance and repair works, in addition to consolidating the foundations of the dam with injections of a cement mix, in a process called grouting.
The engineering company is also training local staff to use its technology.

But scientists say the repairs are just a temporary solution and that the Iraqi population should get ready to evacuate the Tigris’ banks. “No matter how much grouting and maintenance the company will do, it may expand the life span of the dam, but it is just going to delay the disaster,” said Nadhir al-Ansari, professor of water resources and environmental engineering at Lulea University in Sweden and a published expert on the Mosul Dam.

Speaking to Al Jazeera, Ansari said the 3.4km-long dam, the fourth largest in the Middle East, is built on unstable grounds and its collapse is inevitable. “It is just a matter of time. It will be worse than throwing a nuclear bomb on Iraq,” Ansari said.

A recent study by Norwegian experts shows that bedrock settlements and lateral movement continue at a preoccupying pace.

Ansari explained that a bathymetric survey of the bottom of the reservoir in 2011 showed the presence of hundreds of sinkholes north of the dam, some as large as 20 metres, that probably have increased, in number and size, with time.
Iraqi environmentalist Azzam al-Wash said the dam’s movement may not seem to be very large, but for a dam of such significant size, it may be a tell-tale sign of an upcoming disaster. Referring to the repair works, he said: “this is akin to putting a Band-Aid on a gunshot wound and pretending that everything is going to be all right”.

An in-depth study by the European Commission’s Science Centre, released last April, puts the number of Iraqis that could be affected by the dam’s floodwater after its collapse at seven million. The 58-page report by the Joint Research Centre simulates different scenarios that may result from the dam’s breakdown.

If just 26 percent of the dam collapses, the study predicts a flood of catastrophic proportions.

“This simulation … results in a very high wave of water, [up to 25 metres high] … arriving at Mosul after [100 minutes]. The capital Baghdad is reached after 3.5 days with a maximum water height of 8 metres and a mean of around 2 metres.”

Floodwater will destroy the infrastructure of all the cities along the Tigris banks, including Tikrit, until the water eventually stops 700km south of the dam.

Professor Ansari, a former consultant to the Iraqi Minister of Irrigation back in 1995, was in Brussels in June to present his research on Mosul Dam. He said EU officials and diplomats discussed the need to prepare evacuation plans and to identify possible locations for refugees camps.

A symposium of experts, who met in Rome last April to discuss the Mosul Dam, came to a dire conclusion: “The question is not if the dam will collapse due to current factors, but when,” said the scientists, convened by the Peace Ambassadors for Iraq, in their final statement. “The reality of a deluge of almost biblical proportions rushing down the Tigris River, killing millions of people, is very apparent and time is running out.”

The panel said the issue has come down to essentially two options: Attempt to prevent the flood by investing heavily in reinforcing the dam or building a new structure entirely; or focus on how to evacuate millions of lives from the impending devastation following the dam’s inevitable failure.

Formerly known as “Saddam Dam”, the structure started construction in 1981 above a soft and soluble foundation of gypsum, anhydrite and karstic limestone that started eroding upon the filling of the reservoir back in 1985.

Under the rule of Iraqi President Saddam Hussein, General Taha Ramadan chose the site with the aim of providing jobs and improving the living conditions of the population in the Mosul area.

At that time, Turkey and Syria had been already impounding the waters of another important river, the Euphrates, turning large parts of Iraq into desert.

Advised by the Swiss Consultants Consortium, Saddam and his entourage ignored warnings that the site for Mosul Dam was highly risky and that the foundations would require routine continual grouting. In 1988, Saddam agreed to build the Badush Dam with the aim of containing the wave in case of the Mosul Dam’s failure.

However, the project halted in 1991, when sanctions were imposed on Iraq in the aftermath of the first Gulf War and the Badush Dam was only 40 percent complete. After the overthrow of Saddam, the US Corps of Engineers undertook a $27m programme to supply a grouting system for the dam to the Iraqi Ministry of Water.

A report by the US Corps, in 2006, warned that the conditions of the dam were extremely precarious. “In terms of internal erosion potential of the foundation, Mosul Dam is the most dangerous dam in the world,” said the Corps. “If a small problem at Mosul Dam occurs, failure is likely.”

Stuart Bowen, Jr, Special Inspector General for Iraq Reconstruction, in 2007, criticised the grouting programme and said that none of the budget allocated for the dam had been of use to the Iraqis. He cited “lack of quality control, allowing deficient drawings, inadequate construction, incorrectly delivered equipment and materials, and failure to track completion”.

In short, corruption and mismanagement of the funds allocated for the dam’s conservation turned the dam into a time bomb.

Grouting resumed under the supervision of the Iraqi Ministry of Water Resources, but ISIL seized the dam and its 750 MW hydroelectric plant, in early August 2014, interrupting the grouting works.

Two weeks later, US, Kurdish and Iraqi ground forces cleared more than 500 ISIL fighters from the site, only to find that most of the equipment had been stolen or destroyed.

The cement factory remained under ISIL’s control and few of the 320 technicians employed at the dam returned to their jobs.

The interruption of the grouting under ISIL created new alarm about a possibly imminent collapse. In addition, one of the dam’s two spillages gates had not been functioning since 2013, thus contributing to building the mass of water behind it.

“The destruction or failure of the dam could be disastrous for areas downstream on the Tigris River, covering them in up to [20 metres] of water. If that dam was breached, it could have proven catastrophic,” said US President Barack Obama upon the dam’s recapture.

In early March, General Lloyd Austin, III, head of US Central Command, told Congress that if the Mosul Dam failed, it would be a catastrophe. “There will be thousands of people downstream that will either be injured or killed, certainly displaced. And the damage could extend all the way down to Baghdad, or into Baghdad”.

In a communique released in March, the US embassy in Baghdad said that between 500,000 million and 1.47 million Iraqis living along the Tigris river “probably would not survive”.

Only after repeated warnings by the international and scientific communities that repairs may not come in time, the Iraqi government has reportedly advised people living along the Tigris to move away from the river banks.

A statement issued by the Peace Ambassadors for Iraq, at their gathering in Rome, said “modest investment aimed at mitigating the threat proves that the situation has yet to [elicit] a serious response from leading Iraqi officials”.

The panel criticised the Iraqi government for “continual downplay [of] the issue”. The Iraqi minister of water resources, Mohsin Al-Shammari, said rumours of the Mosul Dam’s collapse were just aimed at disrupting state affairs.

“The danger is not imminent, it’s far off,” he told Iraq’s al-Sumeria TV recently. “The danger is 1 in 1,000 … The danger for Mosul Dam is no greater than that of other dams.”

In one of its press releases on Mosul Dam, the ministry said: “it stressed multiple times that the situation in Mosul Dam is nothing to worry about”. Spokesman Mahdi Rasheed also commented that “the Mosul Dam is working very naturally, and grouting and additional construction and repairs are constant.”

However, scientists and environmentalists say the only permanent solution is building a second dam. The US Corps of Engineers has encouraged the Iraqis to expand and complete the construction of Badush Dam, but the project could cost upward of $2bn, and the Iraqi authorities are wary of committing to such an expenditure while a war against ISIL is in full swing and budgets are limited.

In addition, some Iraqi politicians believe the US warnings about Mosul Dam may just be conspiracies to maintain Western influence on the northern region of Iraq.

As Italy announced it would commit to sending its troops to protect both the dam and the company working on repairing it, Minister Shammari, a supporter of Muqtada al-Sadr, a prominent Iraqi religious leader, said Iraq did not need any “foreign support” in guarding the dam.

“It would be cheaper to build Badush rather than continuing with the grouting and maintenance works, but the problem is, there is no political agreement about it,” said Ansari.