On the day Donald Trump was elected as President of the United States, a woman wrote on her Facebook page how his hateful rhetoric led to her embracing Islam.

She has vowed to begin wearing the hijab on 20th January 2017 – the day Donald Trump will be inaugurated as President:
“I have now decided that on Inauguration Day: January 20, 2017; I will begin wearing hijab in public at all times.”

She says she will proudly wear the hijab:
“I will PROUDLY wear hijab and I will call people out on their bigotry of all kinds privately and publicly!” 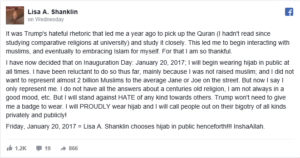 Next article What to do when facing a flash flood